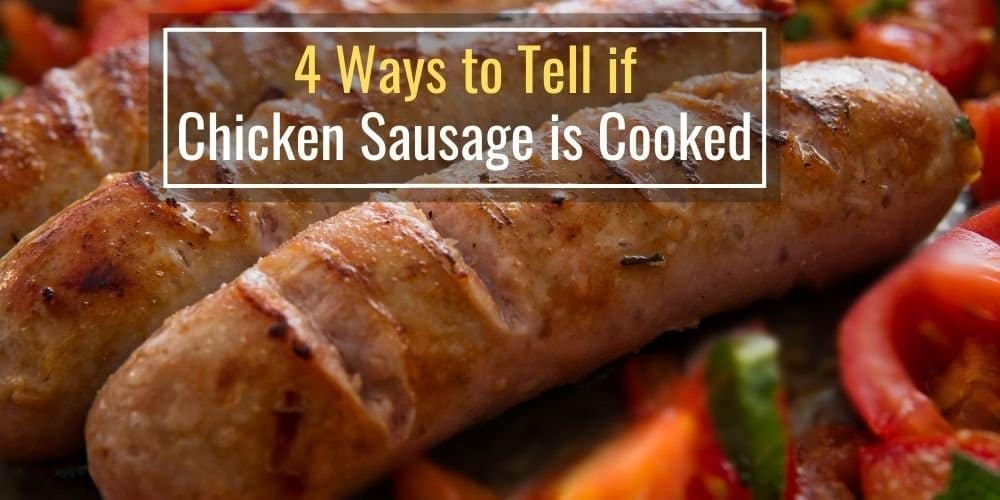 There’s nothing like a good chicken sausage to get your meal going, but how can you tell if the sausage is fully cooked?

It’s not as simple as just looking at the sausage – sometimes chicken sausage can be tricky to tell if the sausage is ready to be eaten.

Thankfully, there are a few different ways to determine that the sausage is cooked thoroughly and tastes great without it becoming undercooked or overcooked.

Here’s the best way to tell when a chicken sausage is cooked:

If you do not own a kitchen thermometer then there are a few other ways to determine if the chicken sausage is fully cooked.

Keep in mind that you usually do not need to remove the sausage casing from a chicken sausage before eating it.

Let’s cover the 4 methods for checking to see if the chicken sausage is cooked and ready to eat!

4 Methods for Checking if Chicken Sausage is Cooked

Here is an inexpensive kitchen thermometer that I recommend which can be purchased on Amazon.

However, if you don’t own a kitchen thermometer then here are four ways to test to see if the chicken sausage is cooked.

To check if a chicken sausage is cooked, slice it to reveal the inside part where the meat is.

There’s a common misconception that slicing one of the sausages to check how the inside is cooking will make the sausage lose its juices. The reality, however, is that there won’t be a notable difference in taste or texture when all the sausages are finally cooked.

So feel free to slice open a sausage and keep an eye on the color as the sausages are cooking.

Generally, cooked chicken sausages will be firm enough to hold up on their own. So a good test is if you are able to pick up a sausage and see if the sausage holds its shape.

Keep in mind that if you just cooked the sausages then they’ll be really hot so use tongs or a towel.

However, a sausage that can hold its shape in mid-air is a good indication that the meat is done.

What’s more, you can wiggle the sausage a little bit. In the event that it’s floppy and moves a lot then the sausage is likely still raw. On the other hand, a cooked sausage will be firm but bouncy.

Another method for checking if the chicken sausage is cooked is to test the sausage’s internal firmness.

First, slice a small piece of the sausage and feel the inner part of the meat.

4. Experiment with One Sausage

If you’re not sure about the time that it takes to cook chicken sausages then you can always try cooking one sausage before cooking the rest.

Should you end up with an overcooked or undercooked sausage, you can adjust your timing for the next sausage until you get it right. That way, it will be easier to tell when the sausages are cooked without even checking the internal temperature.

Can Sausages Have a Little Bit of Pink Inside?

Whenever you have doubts, the best thing to do is to check the internal temperature of the meat, as this is a surefire way to tell whether it’s cooked or not.

You can also use the other ways mentioned in this article to determine whether your sausages are cooked or not.

If, however, you don’t have a thermometer and are not sure, it’s best that you continue cooking the sausages until you are confident that they are done.

Undercooked Sausages: What happens if you eat them?

There is a risk when eating undercooked sausages. Sausages that are undercooked may still contain harmful bacteria that can make you sick.

That’s why it’s important to make sure that your sausages are properly cooked.

When you undercook chicken sausages, the biggest concern you’ll have is food poisoning and a few other health issues such as diarrhoea, vomiting, or nausea.

One of the main issues that can occur as a result of eating undercooked chicken sausages is trichinosis. This ailment is usually the result of eating raw meat that has been contacted by a worm that is referred to as trichinella spiralis.

Another quite common illness is one that is caused by bacteria, including campylobacter or salmonella. Both of these microorganisms cause illnesses that have quite similar symptoms:

Information from the CDC indicates that the above symptoms can take anywhere from six hours to six days to appear after contact with bacteria from the meat. And even though a majority of the patients recover without requiring any medication, there are some cases where antibiotics may be needed to facilitate recovery.

Is It Possible to Overcook Chicken Sausage?

When you overcook your sausages, the best thing that you can do to fix this is to place the overcooked sausages in a pan with some water or broth and simmer them for an extended period of time. This can make them slightly tender but it won’t restore the taste.

Now let’s cover the best methods for cooking chicken sausages so you don’t end up with undercooked or overcooked sausages.

A majority of chicken sausages lovers believe that the most reliable way to end up with perfectly done sausages is by boiling and then frying them.

If you decide to try this method then you will need to boil the chicken sausages for 7-8 minutes before pan-frying them for about 4 minutes just to enhance the taste.

You can also opt to simply pan-fry your sausages without boiling them.

You will need 1 tbsp of oil before placing the sausages in the pan and cooking them for 10-12 minutes.

Keep turning the sausages throughout the cooking process to ensure that they are being cooked evenly before checking the internal temperature to verify that they are fully cooked.

After reading this article, you now know how to determine whether your chicken sausages are fully cooked.

As mentioned, checking the internal temperature of the meat using a thermometer is the only foolproof way to tell whether the sausages are cooked.

However, there are four other methods for determining whether or not the chicken sausages are cooked. Just make sure to play it safe with chicken sausages since eating undercooked chicken can make you sick.