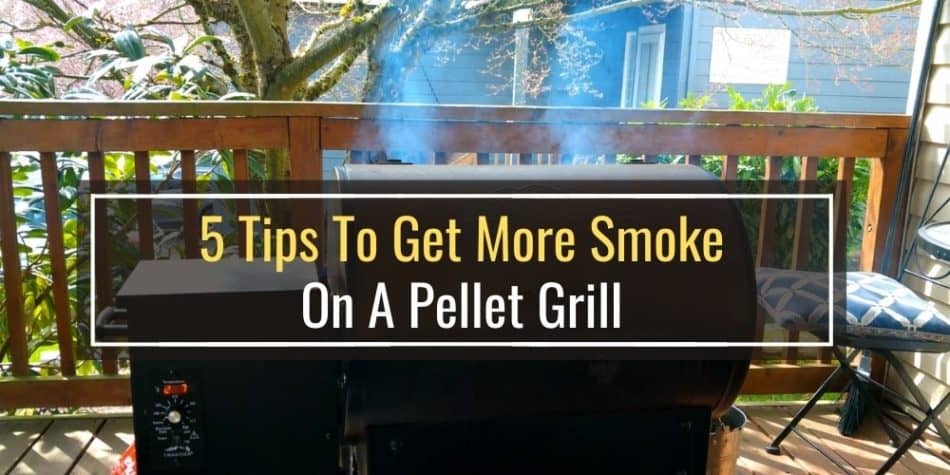 So you fire up your pellet grill and get ready for a nice day of smoking. You put the pellet grill on your desired temperature setting only notice that there isn’t much visible smoke.

Pellet grills are known for smoking meat and creating beautiful smoke rings on the finished food so what’s happening?

Why is a pellet grill not producing enough smoke?

Common reasons for why a pellet grill is not producing visible smoke are high cooking temperatures such as 300°F or higher, wood pellets that don’t produce a lot of smoke, or a malfunctioning pellet grill.

Pellet grills typically produce a balanced amount of smoke so it’s common for a pellet grill to produce a light white-colored smoke versus thick white smoke.

Before we dive into the common reasons why a pellet grill does not produce a lot of smoke.

Let’s cover the best way to increase the amount of smoke inside of a pellet grill.

Tip 1: Use A Smoker Tube For More Smoke

These smoker tubes can be filled with the same wood pellets used in the pellet smoker and are simply ignited using a lighter or torch. After it starts smoking, the smoker tube is just placed inside the grill to produce extra smoke.

I recommend using this smoker tube that can be purchased on Amazon.

If one smoker tube along with the pellet grill is still not producing enough smoke then use two smoker tubes. Placing them on both sides of the smoker should provide complete smoke coverage and the food should develop noticeable smoke rings.

Since pellet grills produce more smoke at lower temperatures, most smoking recipes require the pellet grill temperature to be set at 225°F such as most rib and brisket recipes.

So if your pellet grill is not producing a lot of visible smoke then set the temperature to a low setting such as 180°F.

Other pellet grill owners have reported that using a low temperature setting such as 180°F has produced more smoke on their pellet grills.

Cooking temperatures of 225°F or higher are safe to use the entire smoke and will allow the internal temperature of the meat to reach 140°F within 4 hours.

Read this article to learn more about why a low cooking temperature of 180°F cannot be used to smoke meat the entire time.

Pellet grills can produce a lot of smoke when placed on the ‘Smoke’ or a low temperature setting such as 180°F.

Pellet grills that are set to higher temperatures such as 325°F or ‘High’ may not produce any visible smoke.

This means that pellet grills can be used to cook pizzas and even bake desserts such as pies and cookies.

Tip 3: Use Hardwood Pellets Instead of Fruit Wood Pellets

Pellet grills will also work with other wood pellet brands even if the manufacturer tells you not to. So try wood pellets from other brands if your current pellets are not producing enough smoke.

Other pellet grill owners have reported seeing more smoke by using other brands such as cookin pellets.

Now keep in mind that pellet grills will fluctuate in temperature and smoke as the auger periodically feeds in pellets. So do not expect a continuous amount of smoke to emerge from the grill.

All wood pellets do not produce an equal amount of smoke.

This is why there are some pellets that are better for beef while other pellets are usable for beef, pork, and chicken. Traeger pellet bags will show the following wood pairing table on the back of their pellet bags:

A malfunctioning pellet grill will not produce much, if any, smoke so make sure your pellet grill is operating normally.

A common malfunctioning part with pellet grills is the RTD sensor since this is what measures the temperature inside of the grill.

The RTD sensor is what determines when the auger is turned on to feed in more pellets.

However, there may be other more severe issues if the RTD sensor does not resolve the issue of a pellet grill not maintaining temperature and producing smoke.

Tip 5: The Smoke Setting Does Not Always Produce The Most Smoke

The smoke setting on Traegers will cause the grill to feed in pellets for 15 seconds and wait 65 seconds before feeding in more pellets.

This does not mean the smoke setting will produce the most amount of smoke or will hold any sort of cooking temperature.

This is problematic since food cooked on a Traeger on the smoke setting on a cold day will cook slower than on a hot day. Not to mention the smoke setting will not create the most amount of smoke since the pellet grill is just running through the cycle of feeding in pellets for 15 seconds and waiting 65 seconds before feeding in more.

Set The Pellet Grill To 180°F Instead Of Smoke Setting

The reason why using a temperature setting such as 180°F is better than the smoke setting is it allows you to plan how long the food needs to cook.

The smoke setting can have a wide range of cooking temperatures based on the outside air.

Q: How much smoke should be coming out of smoker?

A: Pellet grills should produce a light white smoke that clears out pretty quickly. The smoke should not be thick or billowing out of the pellet grill as that’s a sign of something burning or too many pellets igniting at once.

Q: Why is my pellet smoker not smoking?

A: First check that the pellet smoker is igniting and the temperature is rising. If not then run through these checks for igniting a pellet grill. The pellet smoker will begin smoking once the wood pellets are ignited.

Q: How to get more smoke flavor from pellet grill?

Another tip for creating more smoke flavor on a pellet grill is to use hardwood flavored pellets such as mesquite, hickory, or oak. Fruitwoods such as apple and cherry leave a lighter and sweeter smoke flavor as opposed to hardwoods.

Q: How to make my pellet grill smoke more?

A: Pellets grill will smoke more when set to a lower temperature such as 180°F or 225°F since this will allow the wood pellets to smolder. Another tip to create more smoke on a pellet grill is use to a smoker tube that can be filled with wood pellets and placed inside of the grill. Generally, the combination of the smoker tube and low cooking temperature will create more than enough smoke.

Pellet grills are versatile grills that can be used to smoke meat, grill food, or even bake desserts and pizzas.

At higher temperatures, pellet grills will not produce as much smoke since the wood pellets are burning faster.

Not to mention food will be removed from the grill faster at 350°F than at 225°F. So food cooked at higher temperatures will not have as much time exposed to smoke.

Thankfully there are some great tips when it comes to increasing the amount of smoke inside of a pellet grill. Using a smoker tube, cooking at lower temperatures, and using different hardwood pellets are the best way to produce more smoke.

As long as the pellet grill is functioning properly then your meat will produce smoke rings if given enough time in the smoker. So hopefully this helps get you back out there and smoking your next delicious meal.