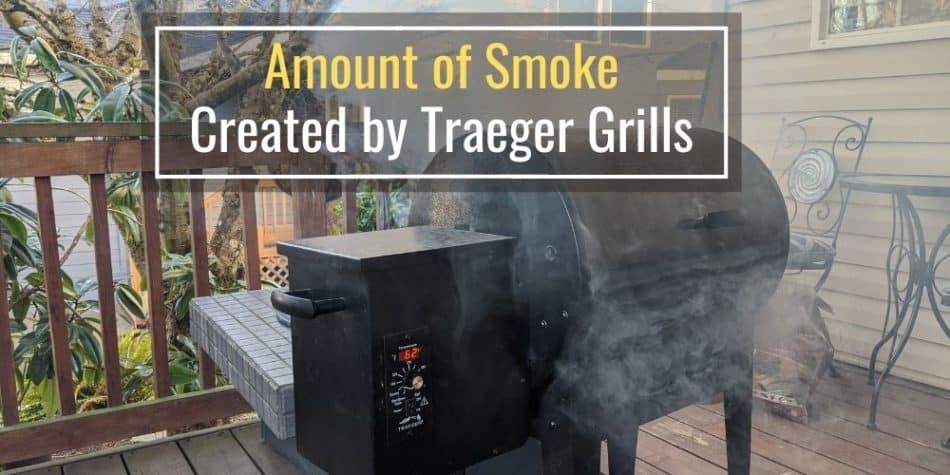 Traeger pellet grills are versatile cooking machines that can smoke a brisket, grill a burger, and even bake a pizza.

Simply change the temperature setting and the Traeger grill will cook food differently.

Given that a Traeger can cook such a wide variety of food, common questions I hear with Traegers are around when they produce smoke and how much smoke do pellet grills make?

So let’s dive into the common questions regarding the smoke levels of Traeger grills and we’ll also cover how to increase or decrease the amount of smoke produced by the Traeger.

Read this article to learn more about how pellet grills work and how to get the most out of your pellet grill.

Does a Traeger Always Smoke?

At higher cooking temperatures, the Traeger grills will feed in more pellets into the firepot which creates a hotter and cleaner burning fire.

Although there is less visible smoke, the Traeger still creates smoke even at high cooking temperatures.

Does a Traeger Smoke A Lot?

Traeger grills will produce a lot of smoke at lower cooking temperatures when the pellets are given a chance to smolder. Keep in mind, plumbs of thick white smoke will lead to an acrid taste. So a Traeger producing a lot of smoke will have bluish-gray smoke that leaves a pleasant smoky flavor.

Even if the Traeger is not producing a lot of visible thick white smoke, the Traeger will still create a smoky flavor on the meat being smoked.

In fact, every pitmaster will advise you to not create thick white smoke since the smoked meat will taste bitter.

Since Traeger grills use wood pellets in order to create both heat and smoke, the pellet grill will create smoke at all cooking temperatures.

Generally, 225 degrees is a popular cooking temperature on Traeger grills for smoking meat low and slow.

Does a Traeger Smoke at High Temps?

Traeger grills will smoke at all temperatures including high temps. Pellet grills burn wood pellets which create both heat and smoke. So even at high temps, the Traeger pellet grill will still create smoke even if it’s less visible.

The wood pellets are fed into the firepot so quickly that the hot fire will burn the pellets relatively cleanly. So the pellets will not have a chance to smolder or produce as much smoke.

However, even at higher temperatures, there is still smoke that does get created by the burning wood pellets.

Does a Traeger Smoke at All Temperatures?

Allowing the wood pellets to smolder will create more smoke which is why most meat is smoked at low temperatures such as 225 degrees.

Trager grills set to a high cooking temperature such as 400 degrees will still create smoke but there will be less visible smoke. At higher temperatures, the wood pellets burn faster which creates less smoke.

However, Traeger grills will smoke at all temperatures since wood pellets are burned to create both heat and smoke.

What Temperature Does a Traeger Smoke At?

Traeger grills will smoke at all cooking temperatures. Traeger grills burn wood pellets which creates both heat and smoke. So as long as the Traeger is turned on, the pellet grill will create smoke the entire time.

That being said, food cooked at a high temperature for a short amount of time will not taste very smoky on a Traeger.

Use lower cooking temperature settings on a Traeger to create a nice smoky flavor on the food.

Some Traeger grill models will have a P setting that allows you to adjust the “Pause Setting” which can change how much smoke the Traeger produces on the Smoke setting.

Allowing the wood pellets to smolder longer will always create more smoke. However, the fire will also produce less heat if there are fewer wood pellets.

So it’s a balancing act to find the right P setting that creates the most amount of smoke while creating enough heat.

See this article to learn how to adjust the P setting on a Traeger.

So use a lower cooking temperature the next time you want to make your meat taste smokier on a Traeger.

The wood pellets will smolder longer which will create that delicious smoky flavor.