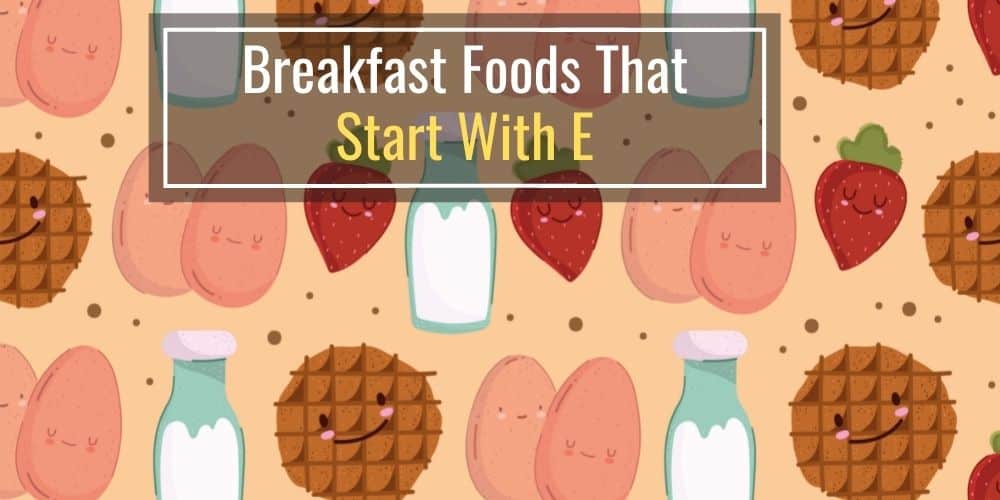 Are you looking for breakfast foods that begin with the letter E?

Then look no further as we have compiled a list of breakfast foods that start with the letter E below.

Eggs are an essential ingredient and breakfast food that starts with the letter E.

Whether you’re eating a hard-boiled egg or scrambling the eggs for an omelet, eggs can be found in most breakfast dishes.

Eggs are a great source of protein and choline and have been recently categorized as a protein food by the US Department of Agriculture on the MyPlate which replaced the Food Pyramid.

So you shouldn’t be surprised to find eggs as an option the next time you go to a breakfast restaurant.

In fact, in 2009, there were an estimated 62.1 million metric tons of eggs that were produced by 6.4 billion chickens which means eggs are an extremely common and popular breakfast food.

An eclair is a delicious pastry that is also a breakfast food that begins with the letter E.

Usually, eclair will be a long and narrow pastry that looks similar to a breaded doughnut. However, eclairs usually have a custard filling as well as some type of fondant icing on top.

Originally from France, eclairs can now be found at most bakeries and coffee shops as a light and delicious breaded food item that pairs well with coffee.

Egg McMuffins are another breakfast food that starts with the letter E.

The McMuffin is a style of breakfast sandwiches that can be found at McDonalds.

The first Egg McMuffin was invented in 1972 by Herb Peterson which resembled Eggs Benedict.

Today you can find Egg McMuffins on the McDonalds breakfast menu that consists of a slice of Canadian bacon, a griddle-fried egg, and a slice of American cheese on a toasted and buttered English muffin.

Eggo waffles are quick and easy waffles that can be microwaved or toasted and are another breakfast food that begins with the letter E.

Waking up in grade school, there was nothing better than smelling Eggo waffles toasting in the toaster.

Not to mention there were commercials running non-stop of “L’Eggo my Eggo” which only made these more popular with kids getting ready for school.

Although technically a brand name of waffles, Eggo Waffles are a breakfast food item that starts with the letter E.

Another breakfast food that begins with the letter E is English Muffins.

An English muffin is a small, round and flat yeast-leavened bread that is usually sliced in half horizontally and is commonly used as buns for sandwiches.

Originally the word muffin is thought to come from the Low German muffen meaning “little cakes.”

However, the first recipes for muffins appear in British cookbooks as early as 1747.

Now English muffins can be found on almost every breakfast menu whether offered on its own or as part of a larger breakfast dish.

An everything bagel is a bagel that has a large variety of toppings baked onto the bagel.

However, the exact toppings used on an everything bagel can vary from each bakery.

Simply toast up an everything bagel, toss some cream cheese or your favorite filling and you’ll have yourself a delicious and light breakfast.

7. Egg In The Basket

Another breakfast food that starts with the letter E is Egg In The Basket.

Egg in the basket, which may also be known by other names, is where a slice of bread has a hole in the center that holds the egg as it’s fried.

Other common names for this dish include bullseye eggs, eggs in a frame, eggs in a hole, and eggs in a nest.

There are other names but you get the point, there’s an egg that is cooked in the center of a slice of bread.

Egg sandwich is the next breakfast food that begins with the letter E.

An egg sandwich is a very broad term since this can include scrambled or fried eggs that are placed in between two slices of bread.

So an Egg McMuffin can technically be considered an egg sandwich.

However, two slices of bread with eggs and cheese are not an Egg McMuffin unless the bread is an English muffin so you can see how they’re similar but not the exact same.

Eggs benedict is the next breakfast food that starts with the letter E.

Generally, Eggs Benedict consists of two halves of an English muffin that are topped with Canadian bacon, a poached egg, and hollandaise sauce.

The origins of Eggs Benedict are a bit vague but it is believed to have been created in New York in the late 1800s.

There are many variations of Eggs Benedict where different types of toppings are used including avocado, salmon, or spinach.

Egg Bhurji, also known as Anda Bhurji, is a scrambled eggs dish that is commonly found in India.

Generally, egg bhurji is made by scrambling eggs with tomatoes, chilies, onion, and fragrant spices and served with slices of white bread.

Commonly eaten for breakfast, lunch, or dinner, this popular Indian street food can be eaten at any time of the day.

Energy bars have become increasingly popular as a breakfast food item and they also start with the letter E.

Although energy bars can reference a wide variety of food and styles, most energy bars will contain cereals, grains, or some sort of oats along with other ingredients.

Whether you select an energy bar that is high in fiber or protein, there is an energy bar out there that will help you start off the day on the right foot.

Not to mention, energy bars can be enjoyed in between meals or sips of coffee so that you can keep moving and grooving while you eat. 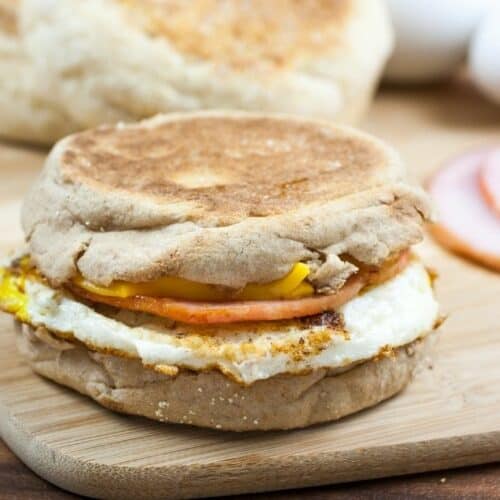 Breakfast Foods That Start With E