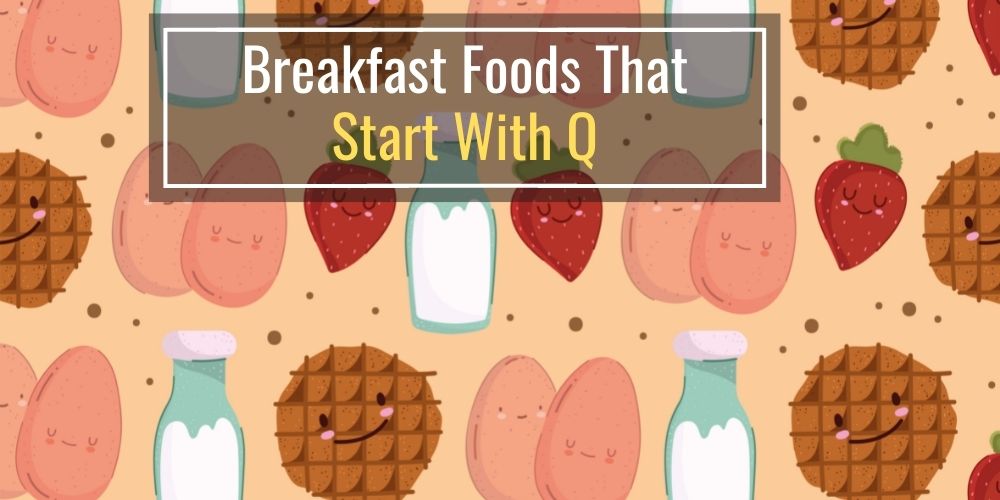 How many breakfast foods that start with Q can you think of?

Besides Quaker Oats or quiche, you might be struggling to think of breakfast foods that start with Q.

So we have compiled a list of delicious breakfast foods that begin with the letter Q!

The list is in alphabetical order so feel free to make it easier to search.

Qatayef is an iconic Middle Eastern treat that is often served for Suhur during the holy month of Ramadan.

This Arabic dish is a form of dumplings or stuffed pancakes made from the yeasted batter with a surprise in the center.

There are numerous variations of Qatayef, which can be savory or sweet. It is usually filled with walnuts or pistachio, but other fillings are widespread, including cheese, cream, fruits, and Nutella.

Qottab is a traditional Iranian dish often served for breakfast that also starts with the letter Q.

Qottab is a deep-fried pastry dish filled with a mix of delicious almonds and spices such as cinnamon and cardamom.

This flavorsome dish is very popular in the city of Yazd.

It is believed that qottab is the last variation of the Persian dish entitled sambusa.

You can sprinkle some powdered sugar on qottab and serve it with a tea, beverage, or coffee.

Quaker Oats, also known as just Quaker, is a company that manufactures cereals, with one of their most popular being their breakfast oatmeal.

Founded in 1887 in Chicago, Illinois, Quaker Oats has made various breakfast foods such as puffed rice, corn brand, and grits.

These cereals are perfect for a quick on-the-go breakfast when you’re running late or simply want to enjoy a nice bowl of cereal on a cold morning.

Quail Eggs, similar to chicken eggs, are a trendy choice for breakfast, and they also begin with the letter Q!

Considered a delicacy in most countries, quail eggs can be eaten raw like in Japanese cuisine or boiled/cooked.

In other countries like Portugal, quail eggs are not considered that exotic, so they are often found with hot dogs or hamburgers.

They are very healthy as quail eggs carry more fat, protein, iron, and vitamin B12 than chicken eggs.

Quark is a type of dairy product often consumed for breakfast that starts with the letter Q.

In the US, quark is known under the names pot cheese or farmer’s cheese.

Quark is considered one of the most nutritious dairy foods due to its high protein, vitamins, and minerals levels.

Quark can be used in numerous sweet or savory dishes that call for any type of cheese. Also, it is an excellent addition to fruit bowls, oatmeal, and as a spread on toast.

Queen of Pudding is a traditional British dessert that starts with the letter Q!

Originating in the 17th century; it consists of baked bread-crumbed texture with jam and meringue topping.

Queen of Pudding is one of the lightest and most mouth-watering desserts commonly served for breakfast.

Several variations of this dish are present today, and fruit is also a common addition to the meringue top.

Queens cake is another popular dish served for breakfast that starts with the letter Q!

This cake was believed to be named after Queen Marry or her sister Anne.

Queens cake looks very similar to muffins, however, they usually have frosting, which is not the case with muffins.

This simple, yellow, and spongy cake can be enjoyed with whipped cream, fruits, or a nice cup of tea or coffee.

Queijadinhas is a custard tart commonly found on breakfast tables.

This flavorful pastry dish comes from Portugal, with numerous variations, but the traditional queijadinhas is made with coconut, cheese, butter, milk, sugar, and egg yolks.

This classic dessert is also very popular in Brazil, and one of its most prominent features is that it does not contain gluten and flour.

Quesadilla is a Mexican dish that starts with the letter Q!

This popular dish is made with two tortillas with a layer of cheese. Over time, it has been adapted to many different styles with various ingredients as a globally popular food.

In the US, quesadillas are served as appetizers and can contain dairy products, vegetables, eggs, and meat.

Breakfast quesadillas are made with eggs, cheese, and meat all wrapped in a toasty tortilla.

Quesito is a type of sweet pastry shaped into a cigar that is often eaten for breakfast.

Filled with cream cheese, quesito is one of the most popular dishes in Puerto Rico, where it originated, although similar recipes can be found in Latin America and the Caribbean.

The word quesito means pieces or bits of cheese, and you can serve it with a glass of milk or cup of coffee.

Quetschentaart is a specialty arriving from Luxemburg that starts with the letter Q!

This simple and open fruit tart is made with zwetschgen or damson plums and traditionally served in autumn.

It consists of dough laid in a tart-baking dish and covered with halved plums arranged in overlapping circles, which definitely gives it a unique and mouth-watering look.

You can enjoy it for breakfast with a glass of milk or tea.

Quiche is a French tart that is served for breakfast. This delicious dish consists of pastry crust filled with custard, pieces of cheese, meat, or vegetables.

Although Quiche is a French dish, these recipes with eggs and cream in pastry are found in English and Italian cuisine.

This dish which has over dozen variations is an excellent choice for breakfast because it can be combined with several filling and healthy ingredients.

Quick bread is a popular breakfast choice, starting with the letter Q!

As implied in the name, this bread can be made very quickly, in under 15 minutes, as it does not require yeast, so you don’t have to knead it.

In addition, quick bread is soft, fluffy, and golden brown, making it ideal for spreads, vegetables, and dairy products.

Quince is a fruit commonly found on breakfast tables.

Native to the Hyrcanian forest region south of the Caspian Sea, this highly fragrant pear-like fruit usually needs to be cooked before eating as most varieties are too hard to be eaten raw.

Quince is not a dish but can be used as an addition to fruit bowls or to make a jam, jelly, or pudding.

It provides numerous health benefits and is high in fiber, antioxidants, and vitamins- a reason more to add it to your breakfast table.

Quinoa is a gluten-free seed of the quinoa plant served for breakfast.

It is commonly used as a substitution for rice and other grains.

In the last couple of years, it has become very popular due to its numerous benefits and nutritional profile- it contains more protein and fiber than rice, and smaller portions will keep you full for longer.

The number of combinations with quinoa is infinite, and you can use it in numerous salads or as a side dish to meat dishes.

Quisp is a crunchy breakfast cereal that starts with the letter Q.

It is a product of the well-known and popular company, Quaker Oats, associated with breakfast foods.

Quisp is a baked paste made of corn meal and syrup. Created in 1965, Quisp is a good substitute for breakfast, but many tend to avoid consuming Quisp due to its high sugar level.

Quorn is a meat substitute product consumed for breakfast.

It originated in Europe and has been marketed as a great source of protein and can be used as a cooking ingredient in other dishes.

Named after the Leicestershire village of Quorn, it was first created in 1985 by Marlow Foods. This product can be used in any recipe that calls for meat.

Qurabiya is a small biscuit made of ground almonds or peanuts that starts with the letter Q.

This interesting dish was first made in Iran in the 7th century AD, and its numerous versions are trendy in most countries of the Arab world.

It is usually served with Libyan tea, Arabic coffee, or Moroccan mint tea. 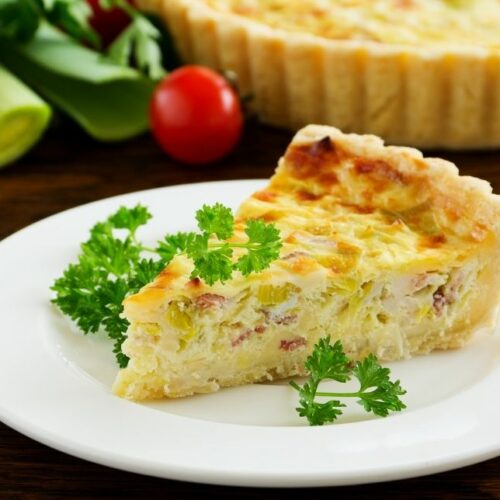 Breakfast Foods That Start With Q