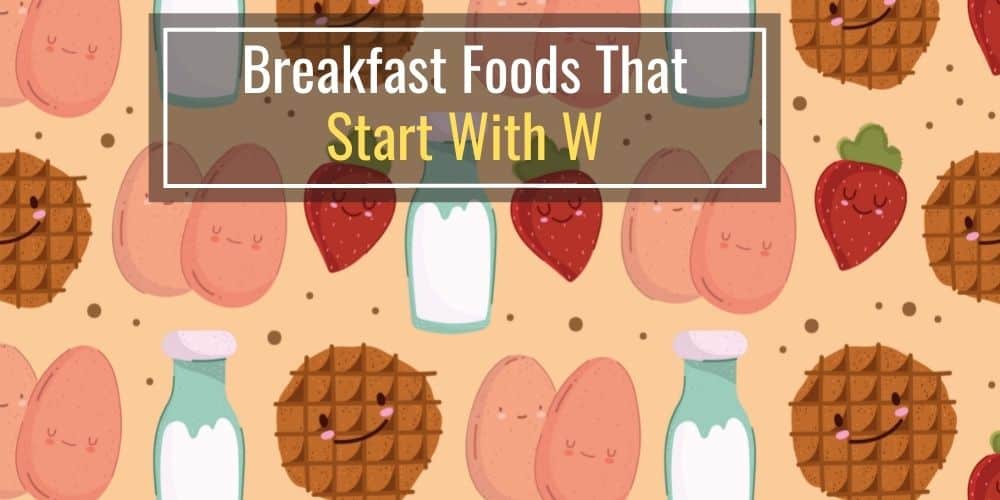 Are you trying to figure out what other breakfast foods start with the letter W?

Well, look no further as we’ve compiled the list of breakfast foods that start with the letter W down below.

The first breakfast food that starts with the letter W on the list is Waffles.

Waffles are a common breakfast food that can be eaten by themselves or with other toppings and additions including fried chicken!

Similar to pancakes, waffles are made by placing the dough into a waffle iron which creates the divets that hold all the extra syrup and toppings you place on top of waffles.

There’s no wrong way to enjoy a waffle for breakfast whether you decide to add fruit, whipped cream, or syrup.

Wrap Roti is a popular food in the Caribbean that can be enjoyed for breakfast that also begins with the letter W.

Depending on the filling, wrap roti can be eaten for breakfast, lunch, or dinner.

A wrap roti generally consists of a parathi roti that is used to wrap and hold the filling which can be anything including chicken, potatoes, and even goat.

Essentially a wrap roti can be seen as a burrito of the Caribbean.

Wheaties are a cereal brand and breakfast food that start with the letter W.

Originally introduced as Washburn’s Gold Medal Whole Wheat Flakes back in 1924, Wheaties have become a staple to the American breakfast cereal aisle.

The ingredients of Wheaties are fairly simple consisting primarily of wheat and bran.

Wheaties cereal boxes usually feature some of the top athletes on the front of the cereal box so they’re hard to miss in the cereal aisle.

Weetabix is a breakfast cereal produced in the United Kingdom.

Similar to Wheaties, Weetabix is made from wheat. However, Weetabix comes in palm-sized biscuits that are 4 x 2 inches in size.

Weetabix can now be found in select stores in Canada and the US.

Wheat itself is a breakfast food that starts with the letter W.

There are a lot of cereals and bread that are made of wheat so we could not pass this essential breakfast food on this list.

Whether you’re eating whole wheat sliced bread, bagels, or even cereal, wheat is frequently found in many breakfast foods.

Especially if you include whipped cream cheese, you will frequently find this on many breakfast bagels in the morning.

Simply by whipping or stirring and mixing air into cream, the cream becomes airier which creates a fluffy and light texture to the whipped cream.

Whether you place whipped cream in your coffee or on top of your waffles, you can usually find whipped cream as a breakfast food item.

The next breakfast food that starts with the letter W is Water Biscuit.

A water biscuit or water cracker is a type of biscuit or cracker. Usually, these crackers are thin, hard, and brittle.

The next breakfast food that begins with the letter W is watermelon.

Whether you are eating a fruit cup or drinking a smoothie, you can usually find watermelon in many breakfast foods.

Not to mention you can even get assorted fruit as a side to many breakfast dishes which usually come with a variety of fruit such as strawberries, cantaloupe, and even watermelon.

The next breakfast food that begins with the letter W is Weisswurst.

Weisswurst is a Bavarian sausage made from ground-up veal and pork. Some seasonings were added and then placed into the sausage casing.

Traditionally, since weisswurst is not smoked or otherwise preserved, the weisswurst was usually consumed for breakfast or before lunch.

Given that the lack of preservatives meant the sausage had to be eaten before lunch otherwise the sausage would spoil meant this became a popular breakfast sausage in Germany.

The next breakfast food that starts with the letter W is white rice.

Although eaten less often for breakfast in the United States, white rice is a widely available carbohydrate that is eaten with most meals in other countries.

Even in the United States, you may run into fried rice dishes that have scrambled eggs, meat, and other ingredients that can be eaten for breakfast, lunch, or dinner.

Another breakfast food that starts with the letter W is white potatoes.

White potatoes, or potatoes in general, can be found in many breakfast foods from hashbrowns to country skillets and even potato pancakes.

Similar to eggs, potatoes are another one of those essential breakfast ingredients that can be found in many breakfast dishes.

Wolfberry, also referred to as goji berry, is a bright red berry that originates from China and is a superfood.

Whether you eat wolfberries raw or drink them in juice, wolfberries contain a high amount of vitamin A, C, fiber, and iron.

Goji berries are claimed to be the fountain of youth so it definitely can’t hurt to drink some wolfberry juice in the morning. 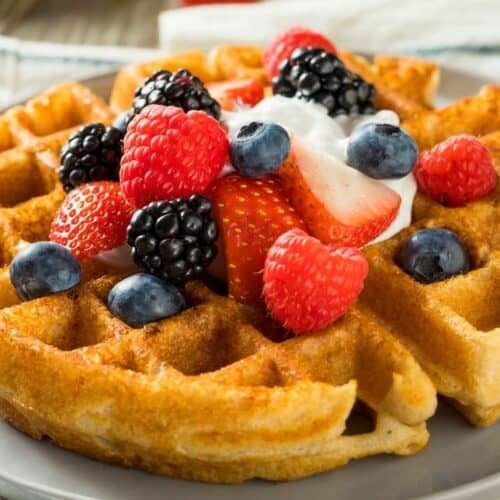 Breakfast Foods That Start With W