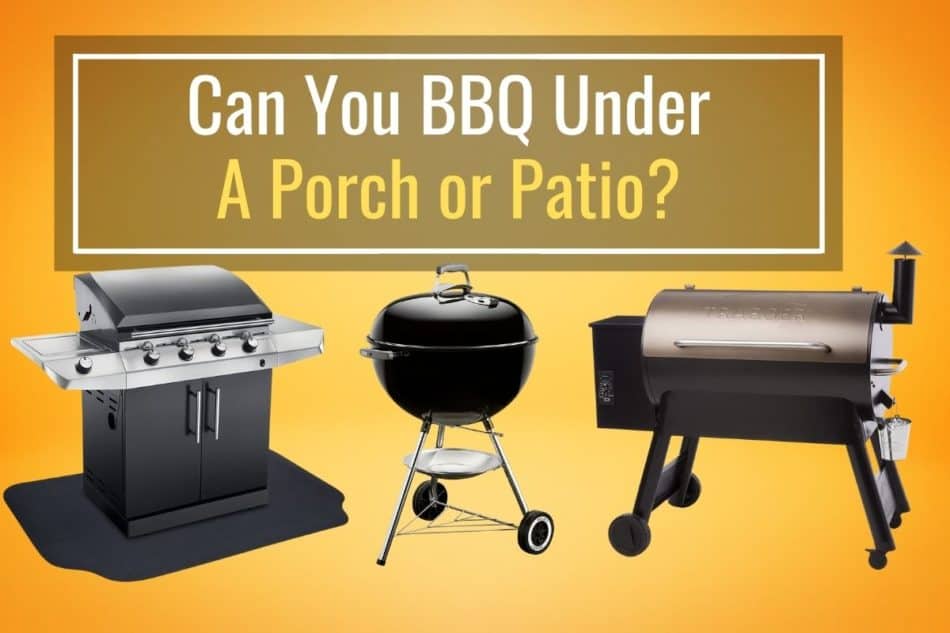 As the summer fades away and fall and winter months roll in, a common desire I get is to keep grilling.

However, rain and snow can make outdoor grilling impossible or unenjoyable. There are ways to grill under a covered area such as a covered deck, gazebo, or carport.

A common question I hear is if it’s possible to BBQ under a porch or patio?

Keep in mind the biggest factor to consider when using a BBQ grill under any covered location is safety.

You always want to make sure that the heat and smoke from the grill can safely blow away and that the grill will not start any uncontrolled fires.

Now let’s cover some factors to consider when deciding whether or not to BBQ under a porch or patio.

Factors To Consider When Grilling Under a Porch or Patio

Here are the two main factors to consider when grilling under anything including a porch, patio, gazebo, pergola, etc.

The first and most important consideration is the vertical and horizontal clearances of your BBQ grill.

Most BBQ grills will produce a lot of heat and smoke so you want to make sure that your grill is placed a safe distance away from other objects.

For example, below are the minimum vertical and horizontal clearances that Traeger recommends for using their pellet grills.

Keep in mind that pellet grills usually smoke food at lower cooking temperatures so a pellet grill may require less minimum distances than a propane or charcoal grill.

The second most important factor when determining whether or not to use a BBQ grill under a porch or patio is the airflow.

BBQ grills will produce heat, smoke, and toxic fumes such as carbon monoxide. This is why BBQ grills cannot be used in enclosed spaces such as a garage or shed.

However, BBQ grills can be used under a porch as long as there is enough airflow to blow away all of the grill’s fumes.

Now that you know the two most important factors to consider when grilling under a covered area, let’s cover some tips to help you BBQ under a porch or patio.

1. Position The Grill Away From Home

Grills produce a large amount of heat so you do not want to accidentally start an uncontrolled fire on a large structure. So place the grill at least 10 feet away from the home if possible.

Grills will produce a large amount of heat which can dry out and ignite any nearby combustible objects. So it’s a good idea to remove any nearby decorations or plants that can catch on fire.

For example, low-hanging branches and plants should be moved away from the grill so that they do not dry out and potentially ignite.

If there is an object that is near the grill that cannot be moved then place a welding blanket or some other insulation material to prevent the object from getting too hot from the grill.

When grilling meat that has higher fat content, you may notice that the smoke from the grill can turn a dark white or black color. There’s a good chance that this smoke will cause anything above the grill to become discolored.

So if you are grilling under a porch then expect the porch’s ceiling to be stained with grease, food particles, and other grill marks. Once these stains set in, they can be quite difficult to remove.

Keep this in mind in case your ceiling is a white or light color since this might discourage you from grilling under a porch or patio.

4. Do Not Use Lighter Fluid

Avoid using lighter fluid or other fire accelerants which can create a large fire or flare-up.

A quick and large flame can cause issues when grilling under any covered area.

When grilling under a porch or patio, you want to have a controlled fire the entire time which means avoiding lighter fluid. This also means trying to avoid grilling fatty foods directly over the fire which may also create a large flare-up.

Ideally, you want to have a low and controlled fire that consistently cooks the food.

Similar to not using lighter fluid, you want to use lower cooking temperatures so the grill does not produce as much heat to nearby objects.

Using lower cooking temperatures will also help prevent flare-ups since less fat should be dripping from the food when being cooked low and slow.

For example, using a lower cooking temperature such as 350°F instead of 600°F will cook the food slower but also help prevent the fire from flaring up and reduce the amount of heat the grill gives off.

The best option when grilling indoors or in an enclosed or covered area is to use an electric grill that is rated for indoor use.

Electric grills that are rated for indoor use will operate similarly to a regular kitchen oven. There will be heating coils that generate heat inside of the grill that cooks the food.

So electric grills are the safest option when grilling under a porch or patio. However, these electric grills that are rated for indoor use may not produce the same flavor that you can get on a charcoal or gas grill.

So there are tradeoffs to the safety and convenience of indoor electric grills.

When grilling in general, a fire extinguisher should be within reach.

When grilling under a porch or patio, make sure to have a fire extinguisher nearby. Anytime you use a grill near your home or any structure, you want to make sure you can extinguish any stray embers immediately so that the flames do not spread.

When you want to BBQ under a patio or porch just keep in mind that there are a few safety concerns to consider.

BBQ grills can be used under porches or patios as long as there are sufficient airflow and safety clearances. Airflow is needed to blow away the heat and smoke while the grill needs to be placed far enough away from any nearby combustible objects.

So as long as you take the necessary safety precautions and ensure that there is enough airflow and vertical and horizontal clearances then BBQing under a porch or patio is possible.

Just make sure that you are taking all the necessary safety precautions since it is more dangerous to grill under or near structures and objects.

Once those safety precautions are taken, you can get back to creates some tasty BBQ for your friends and family.