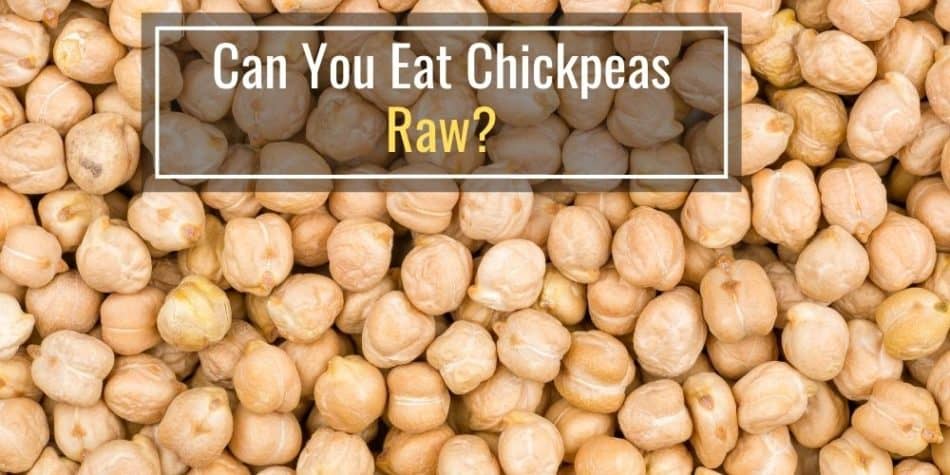 If you’ve eaten chickpeas before, you can agree that they are, without a doubt, delicious and nutritious. Chickpeas, also known as Garbanzo beans, are a type of legume that is high in protein, fiber, and carbohydrates.

They are often cooked and eaten as part of a meal, but the process is not so intuitive. For this reason, some people wonder if they can be eaten raw or maybe even in an undercooked state.

So, what’s the answer? Can you eat chickpeas raw or are there risks associated with eating them this way?

So boiling dried chickpeas is necessary in order to cook the chickpeas whereas canned chickpeas are already precooked.

Now let’s quickly cover why you should not eat raw dried chickpeas.

One of the worst things that would happen if you ate your dried chickpeas raw is that you would experience abdominal discomfort.

Upset stomachs related to eating raw chickpeas are mainly attributed to oligosaccharides, which are sugars that humans can’t digest.

In addition to oligosaccharides, eating raw dried chickpeas could expose you to lectin, which is a toxin that is found mostly in raw legumes. This toxin can bring forth a range of negative effects such as diarrhoea, nausea, stomach aches, and others.

The good news is that after you have soaked and cooked chickpeas, you will have destroyed the active lectin, making the chickpeas safe to eat.

Even though including fiber in your diet is beneficial to bowel movements, having too much fiber can cause some issues such as blockages.

Since chickpeas contain very high amounts of fiber, consuming raw dried chickpeas could mean that you are consuming too much fiber and that’s not good for your bowel movement.

Not to say that cooking chickpeas will reduce the fiber content, but it can reduce the probability of experiencing the issues that come with the excessive consumption of fiber.

A majority of dried legumes are incredibly crunchy or rock-hard until they are cooked. As such, even if dried chickpeas were good to eat when raw, the issue of their hard texture will still be a problem.

In extreme cases, you could risk chipping your teeth or wearing down the enamel of your teeth.

So do not eat dried raw chickpeas.

Dried garbanzo beans are not cooked, which is why you may even find some packages that instruct you to soak the beans before cooking them.

On the other hand, canned chickpeas are pre-cooked and preserved in a syrup that helps them retain their color, flavor, and shape.

As such, if you have been wondering whether canned chickpeas can be consumed straight from the can, then the answer is Yes!

Before eating canned chickpeas, however, be sure to rinse them off so that you can get rid of the excess sodium.

While canned chickpeas are safe to eat, they often taste better when you cook or roast them.

Why Do Chickpeas Give Me Gas?

If you are wondering why chickpeas give people gas, then know that it’s because they contain oligosaccharides that are not fully digested by the human body.

While other sugars get broken down and are absorbed in the small intestine, your body will not produce enzymes that can break down oligosaccharides.

If other products that have not been digested in the small intestine enter the large intestines, more gas is produced. The end result is abdominal discomfort.

Ways To Reduce or Prevent Gas

The only way to ensure that eating garbanzo beans does not give you gas is to ensure that the oligosaccharides are digested before they get into the large intestines.

You can do this with the help of an enzyme that is known as alpha-galactosidase. The only challenge that you have to deal with is that the human body does not have this enzyme in the digestive tract.

As such, the workaround to this problem is taking the enzyme in supplement form before mealtime. Enzymes that are used to make such supplements are gotten from a fungus known as Aspergillus niger. The supplement is mainly available in pill form under various brand names such as Beano.

There, however, are some groups of individuals that should avoid using Alpha-galactosidase to break down oligosaccharides. One of the main groups is persons with diabetes. That’s in consideration that the increased breakdown of oligosaccharides using the enzyme can result in a spike in blood sugar levels.

One of the sugars whose levels in the blood increase as a result of using Alpha-galactosidase to break oligosaccharides is galactose. As such, individuals who have a genetic condition known as galactosemia should avoid using the enzyme at all costs.

So there are ways to reduce and prevent gas from eating chickpeas by consuming alpha-galactosidase enzymes like Beano.

It’s highly recommended that you do not eat raw dried chickpeas since there are some undesired side effects from doing so.

The best alternative to eating raw dried chickpeas is to eat raw canned chickpeas or to simply boil, cook, or roast your chickpeas.

That being said, you will still have to take an Alpha-galactosidase supplement before you eat garbanzo beans if you are susceptible to flatulence caused by the oligosaccharides in these legumes.