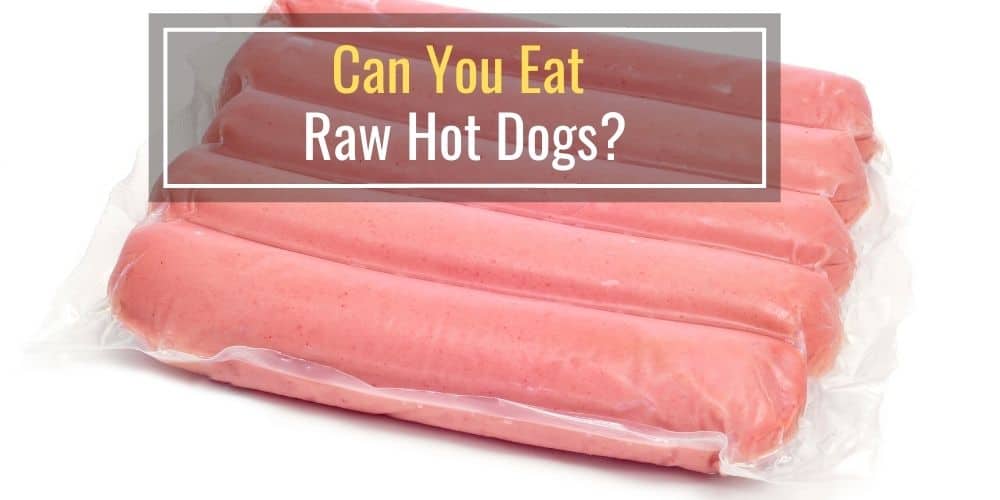 Hot dogs are one of those common grilling foods that everyone loves but no one really knows what they’re made of.

So it’s challenging to determine whether or not you can eat a hot dog raw if we don’t even know what’s in a hot dog.

Here’s a brief run-through of what hot dogs are and how they’re made:

A hot dog is a sausage of sorts. Hot dogs are made up of beef, pork, or other meat, as well as fat and various spices.

The meat mixture is usually encased in a section of the animal’s stomach and intestines to shape the meat into a hot dog.

However, hot dogs can also be wrapped in a temporary cellulose liner that holds the meat mixture while the hotdog is cooked. Afterward, the liner is stripped free leaving a cooked hotdog without any casing.

Given that hotdogs are usually precooked, the question I commonly hear with hot dogs is if you can eat hot dogs straight from the packaging without cooking them?

So can you eat raw hot dogs?

Can You Eat Raw Hot Dogs?

Generally, hot dogs are already cooked before being packaged so most hot dogs are not raw. However, the FDA does not recommend eating a raw hot dog or hot dog straight from the package.

Although hot dogs are pre-cooked before being packaged, hot dogs should always be cooked or reheated before being eaten. According to the FDA, hot dogs may be contaminated with the bacteria Listeria, which can only be killed by reheating the hot dogs.

So although it is possible to eat a hot dog straight from the packaging and you might be fine after eating the hot dog, there is a chance that you could get sick if the hot dogs are contaminated.

Given that hot dogs are quick to heat up and cook, it’s much better and safer to just boil or grill the hot dogs before eating them.

Can You Eat Hot Dogs Straight Out of the Pack?

Although hot dogs are pre-cooked before being packaged, hot dogs should always be cooked or reheated before being eaten. According to the FDA, hot dogs may be contaminated with the bacteria Listeria, which can only be killed by reheating the hot dogs.

So it is possible to eat hot dogs straight from the packaging and you might be fine. But given that there is a chance of contracting Listeria, hot dogs should be boiled or grilled before being eaten.

Not to mention cooked or reheated hot dogs will taste much better than cold ones. So toss the hot dogs on the grill for a few minutes to kill any potential bacteria before eating them.

What Happens if You Eat an Undercooked Hot Dog?

Listeriosis is a type of bacteria that can be found in raw meat and uncooked vegetables. If you eat an undercooked hot dog, you may contract listeriosis as well as other types of foodborne illnesses such as E coli, campylobacter, salmonella, and shigella.

It is best to avoid eating undercooked hot dogs, as the bacteria in the hot dog may not have been killed.

Thoroughly cooking a hot dog will kill these bacteria which is why it’s important to cook a hot dog to the point that steam exits the hot dog when opened.

Signs that a Hot Dog is Undercooked

A hot dog is undercooked when it is still pink in the middle. Generally, hot dogs will remain pink in the center when the hot dog has not been cooked for a long enough time.

Given that hot dogs are usually topped off with ketchup, mustard, and other toppings, overcooking a hot dog is not a culinary mistake.

So give those hot dogs a few extra minutes on the grill to make sure the hot dog is cooked thoroughly and that there is not any pink color in the center of the hot dogs.

How Long To Cook Hot Dogs

There are many ways to cook hot dogs that have different cooking times to thoroughly cook them.

Here are the cooking times associated with the most common hot dog cooking methods:

So microwaving is the fastest way to thoroughly cook a hot dog.

Although grilling does take the longest to cook a hot dog, you also get the added flavor from the grill and those lovely grill marks. So I personally recommend grilling hot dogs.

Can You Get Food Poisoning From Raw Hot Dogs?

This doesn’t mean that you won’t get stomach issues from eating hotdogs raw. These issues are not going to be as severe as food poisoning, but they still can cause varying levels of discomfort.

However, it is possible that you could get food poisoning from a hot dog if you choose to eat it raw or undercooked, but that would require you to have direct contact with the bacteria.

Raw hot dogs are not entirely safe to eat because they may contain other harmful bacteria like listeria and salmonella. These bacteria have a bigger chance to cause food poisoning.

Botulism is another common sickness related to raw hotdogs, and it is an intoxication caused by eating foods that contain a toxin produced by the bacterium Clostridium botulinum. Botulism will cause more serious symptoms of food poisoning.

What Kind of Food Poisoning Can Come From Hot Dogs?

Hot dogs can be contaminated with different types of bacteria and viruses that cause food poisoning.

There are three main types of food poisoning that can come from eating raw or undercooked hot dogs.

One is caused by the previously mentioned Clostridium botulinum. This causes the food to develop a toxin that causes all the nerves in your body to stop working, which can lead to paralysis, respiratory failure, andin the worst cases it can cause death.

The second type is caused by a bacteria called listeria monocytogenes. This bacteria can cause fever and muscle aches, but it is not as dangerous as the first type of food poisoning.

The third type is caused by a virus called norovirus or sometimes referred to as the Norwalk virus. This type of food poisoning causes vomiting and diarrhea, but it usually goes away after one or two days without treatment.

Although hot dogs are usually pre-cooked before being packaged, the hot dogs may still be contaminated with bacteria from the manufacturing plant. So it’s recommended to always cook a hot dog before eating it and to NOT eat a hot dog straight from the package.

Given that hot dogs can be cooked thoroughly in 3 minutes in the microwave or 10 minutes on the grill, there’s really no reason to eat a hot dog straight from the package.

Hot dogs cook quickly and easily, so make sure to allow the hot dog to get hot enough to the point where steam exits the hot dog once opened.

The heat will ensure that any remaining bacteria will be killed and the hot dog will be safe to consume.