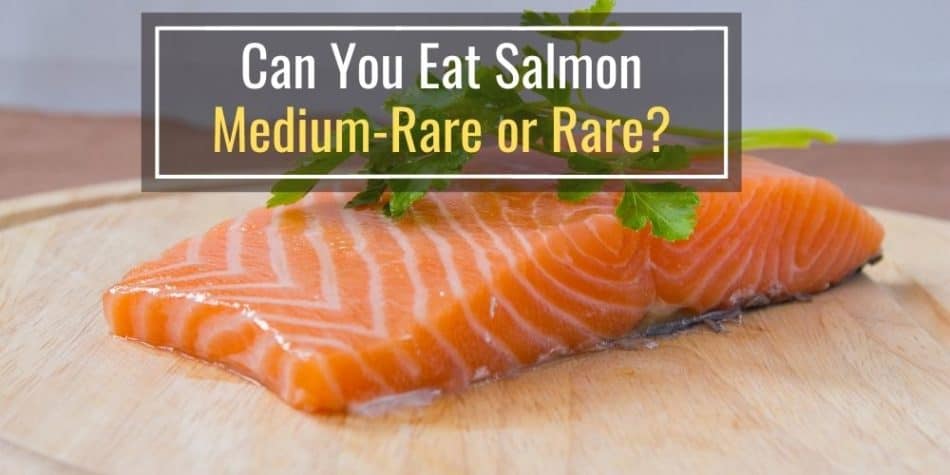 You may have seen the salmon being served raw at a sushi restaurant, while on the other hand, you see it cooked thoroughly on TV shows.

So, which one is it? Can you eat salmon medium-rare or rare?

Salmon, like steak, has several doneness options when it comes to cooking. The best way to eat salmon is by having it cooked medium-rare or medium. Salmon can be eaten raw or rare in sushi, however, the salmon needs to be “sushi grade” or previously frozen to remove any parasites.

So when it comes to cooking salmon, generally, salmon tastes best medium-rare when there is a moist middle and when the outside flesh is flaky.

The traditional rule of thumb states that fish should be cooked until it’s opaque and flaky.

The 10-minute-per-inch-thickness rule of thumb might be outdated and is probably not the best way to prepare salmon.

However, there are dangers to eating salmon raw or rare as it could contain parasites that could be harmful to your health.

Is It Safe to Eat Salmon Medium Rare?

The new standard for cooking salmon and making it safe to eat is medium-rare or medium.

A medium rare salmon is when the fish has achieved a wholly opaque color, and the meat remains moist and a bit juicy. There’s very little in terms of fibrousness or chalkiness, but there will be visible flaking.

There are several ways to ensure your salmon comes out medium-rare or medium (which we’ll discuss later on).

You might notice salmon turning from translucent to opaque, or red to pink as it’s put on the pan which is perfectly normal.

The good news about cooking salmon is that you can easily tell if it’s raw just by looking at the filet’s thickest part. If it’s still red or bright pink then it’s a good idea to leave it on the burner for a few more minutes.

Not only is it safe to eat salmon that’s medium-rare, but it’s also actually the recommended cooking doneness as per chefs and experts.

The FDA may have a different opinion for salmon where they say that it should be cooked at around 145°F, which is equivalent to a well-done fish. But in the restaurant industry that’s called ‘overcooking your fish’.

How To Cook Salmon to Be Medium Rare

Now that you know that the best doneness for salmon is medium-rare, let’s cover how to cook the salmon so it ends up perfectly medium-rare.

The easiest way to determine if your salmon is already medium or medium-rare is to use a sharp knife and check the filet’s thickest part. It should have a bit of translucence and not appear raw. Furthermore, the flakiness should be there.

If you don’t want to possibly ruin your salmon filet, you can use a toothpick. Slide it into the middle part, then pull it out. A medium-rare salmon should not have any resistance or pull.

Alternatively, you can also use your finger or a fork to see if the fish flakes using a gentle push. If it does, then you can take it off the stove and allow it to rest.

There’s a secret to cooking salmon on both sides to ensure an even texture and doneness.

First, you should heat up the stovetop to about medium or medium-high heat. Then, make sure the salmon is thoroughly patted dry and the salmon is at room temperature. The less moisture the fish has, the more crispy the skin turns out in the end.

There’s also a technique that’s called ‘resting’. Here, you pull the salmon out of the stove or pan just before it’s cooked the way you want it to. Then, put the fish on a platter and cover it for around 7 to 10 minutes.

It’s easy to pass from medium-rare to medium, and well done if you’re not careful.

However, if you find yourself needing to do several things at once, you can take the guesswork out by using a bit of tin foil and a baking sheet. The idea here is to put the salmon in the foil with seasonings, then wrap it and seal it before you cook.

When cooking the salmon, wait until the salmon reaches an internal temperature of 120°F before pulling the salmon off the grill or oven and rest for 5 minutes. The salmon will reach medium-rare after 5 minutes of resting.

Why You Should Not Eat Rare Salmon

As a general rule, it’s unwise to eat undercooked and raw fish as it increases your chances of getting sick from foodborne illnesses. The same goes for salmon as raw salmon that has not been frozen or properly treated can contain parasites, bacteria, and viruses.

Some people say that cooking salmon destroys the nutrients inside it, which isn’t true. Raw salmon inhibits the formation of thiamine, but heat deactivates it so you can absorb thiamine while you eat salmon.

So if the salmon has been previously frozen or correctly treated to be “sushi grade” then the salmon can be eaten raw or rare.

However, all other salmon that has not previously been frozen is not safe to eat since there are high chances the salmon contains parasites, bacteria, and viruses that can make you sick.

Can You Eat Salmon Raw in the Middle?

Salmon that is sushi-grade or has previously been frozen or properly treated can be eaten completely raw or raw in the middle. However, most salmon should be cooked thoroughly to the point where the flesh is light pink and flaky.

It is common to see salmon or tuna that is seared on the outside while the inside is raw served at restaurants.

However, once again, the fish needs to be treated properly in order to ensure that the fish is safe to eat raw as opposed to a regular salmon fillet that is sold at a local market.

How To Tell If Salmon Is Spoiled

You should never eat raw or cooked salmon if it has spoiled.

Salmon that has gone bad is characterized by a slimy texture and a ‘fishy’ smell that’s very similar to ammonia.

You may also see white and flabby worms in salmon, and this signals that you should throw away the salmon.

Cooking any meat that has gone bad will not make that meat edible. The same goes for salmon so as soon as the salmon is spoiled then toss it out and do not try cooking the bad salmon.

Generally, salmon should be cooked to at least medium-rare so that the salmon is safe to consume.