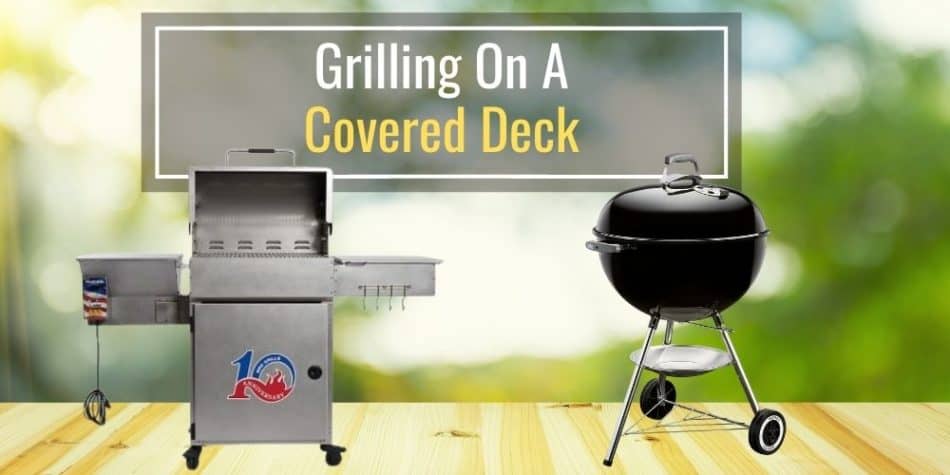 Grilling is always a fun and great way to spend time with family and friends.

However, sometimes the weather doesn’t cooperate and will decide to rain or even snow on your party.

Thankfully, if you have a covered deck you will have some dry space that looks like it can be used to grill. But can you grill on a covered deck?

While it looks like a good idea to grill your meals on a covered deck, most grill-makers such as Weber advise you not to. However, the grill manufacturers are concerned about airflow and nearby combustible materials.

The ideal distance between any combustible material and the grill should be at least 10 feet (3 meters). The distance allows the smoke and heat to cool down before touching the deck so that your deck will not catch on fire.

So that means both the railing and the ceiling should have enough distance away from the fire so that the heat can safely dissipate. Otherwise, the railing or ceiling can get damaged or catch on fire.

Let’s cover some things to keep in mind if you decide to grill on a covered deck.

Factors To Consider When Grilling Under A Covered Deck

Now that you know you need to take some precautions before grilling on a covered deck, let’s cover the main factors to consider before setting up your grill.

The most important factor to consider before grilling under a covered deck is how high the ceiling is.

The hot smoke from the grill can cause damage over time if the heat and smoke are not allowed to safely cool down. If the ceiling is too short then a grill can even start a fire which would be catastrophic!

So make sure that the ceiling is at least 10 feet tall before placing the grill underneath a covered deck.

The second most important factor to consider is where the grill is going to be placed on the covered deck.

Even if you have enough space in your covered deck, the spot where you place your grill makes a difference.

It’s not just about placing the grill in a way that creates enough clearance between the grill and combustible materials. It’s also about having enough room to keep an eye on what’s going on around your deck and barbecue area.

Generally, you want to place your grill 10 feet away from any combustible materials that include railing, pillars, and the ceiling.

The type of grill matters when considering grilling under a covered deck.

Charcoal grills should never be used in an enclosed space, mainly due to the fact that they burn hotter and are harder to control than propane grills.

Charcoal grills should never be used on a wood deck since they produce embers that can potentially scar the wood or even cause a fire.

So only propane or pellet grills should be used under a covered deck since there are temperature controls for these grills.

Don’t forget to consider the material of the deck since wood decks will need to be insulated in order to safely grill on top of them.

Synthetic decks do not need protection but it is good practice to use a grill mat to protect the deck from any grease or embers.

Grill mats can be purchased from any department store or on Amazon and simply get placed underneath the grill.

As seen in the image above, the grill will now be insulated away from the deck so that the heat from the grill does not damage the deck.

I highly recommend getting a grill mat if you plan on grilling on top of an area that you do not want to get stained from grease or damaged from embers.

Safety Tips For Grilling On A Covered Deck

When grilling on a covered deck, it’s crucial to take the necessary steps to ensure your safety.

Grilling on a covered deck is not recommended if you can grill in an uncovered location 10 feet away from the home.

So always make sure to keep the following safety tips in mind when grilling on a covered deck.

First and foremost, take all the fire safety precautions when grilling on a covered deck.

Make sure you have a fire extinguisher or garden hose within reach at all times when grilling. Although grills have been designed to be safer, all it takes is one time for a catastrophic event to happen.

2. Keep Children And Pets Away From The Grill

This one is pretty self-explanatory – grills get hot, and the last thing you want is for your loved ones to get hurt while you’re trying to enjoy a barbecue.

Even more dangerous is when the grill is sitting on top of a wooden deck or close to combustible materials. Kids and pets are great but we want to ensure that the grill does not get knocked over.

So keep the kiddos and pets away from the grill.

3. Do Not Leave The Grill Unattended

This is another rule that applies to grilling in general and not just when you’re using your grill on a covered deck.

Never leave your grill unattended especially when there are fatty foods such as steaks, burgers, and other meats on the grill.

Flare-ups can quickly lead to uncontrolled grill fires. So make sure to at least keep an eye on the grill if you need to step away.

4. Do Not Use Defective Grills

If you notice that something is wrong with your grill (e.g. faulty heat distribution, broken ignition), then don’t risk using it on a covered deck. It’s better to put off your barbecue until you get the problem fixed than take the risk of causing an accident.

If it’s a problem that you can fix on your own, by all means, give it a go.

However, if the problem is something that requires professional help (e.g., faulty wiring), then do yourself and everyone around you a favor and wait until the grill is fixed before using it.

5. Do Not Overheat The Deck

Although this ties in with fire safety, just a reminder to not overheat the deck.

When it comes to grilling, we all want to get the best results with minimal risk of injury. That way, you get to savor every bite while feeling the exceptional warmth of being with family and friends.

For that to happen, you will want to make sure that you grill on a covered deck only when it’s safe to do so.

So grill under a covered deck only if there is sufficient airflow and the grill is kept at least 10 feet away from combustible materials. Make sure the ceiling has enough height so that it does not get damaged or catch on fire from the grill.

Just remember, safety first and you’ll be all set to grill on a covered deck.

That’s all for today.

Be sure to check back frequently for more tips and advice on everything grilling.