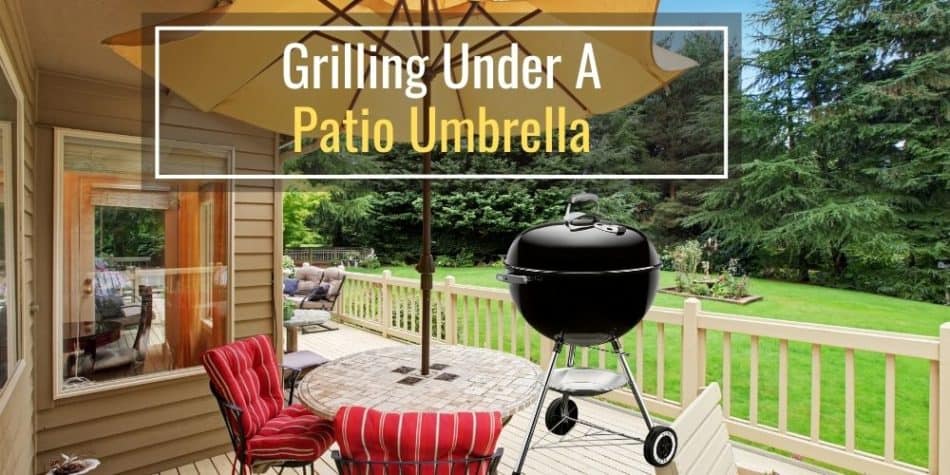 Having a shelter or covered area for a grill can make grilling outdoors possible while it rains.

However, can you grill under a patio umbrella?

Grilling under a patio umbrella is possible. However, the heat and the smoke may damage and discolor the umbrella. Place the grill as far away from the umbrella stand as possible and do not use lighter fluid on the fire to prevent large fires and flare-ups.

It is possible to grill under covered areas such as a covered deck, patio, and even a gazebo.

However, many covered structures have vertical clearances that are 10+ feet which provides enough space for the heat and smoke from the grill to safely vent out.

So let’s dive into some factors to consider when grilling under an umbrella.

Important Considerations For Grilling Under An Umbrella

There are a couple of factors to consider when thinking about grilling under a patio umbrella.

The most critical factors are the umbrella’s material, height, and size.

If your patio umbrella is made up of Sunbrella fabric, the most popular, durable, and weather-resistant fabric then these umbrellas are safer to grill under than other materials.

Sunbrella is a great material since the umbrella will shelter you from the rain and sunshine while still being breathable. This means the smoke from the grill will be able to blow away.

If the umbrella material is made of polyester, acrylic, or canvas then some additional precautions should be considered. These materials are not as durable when it comes to high heat so the umbrella should be set on the tallest setting.

Always keep an eye on the umbrella to ensure that there is not any warping or damage from the heat.

2. Use A Suitable Height

Generally, an umbrella should be placed on the tallest setting when grilling underneath the umbrella.

Ideally, the heat and the smoke from the grill should be given as much space as possible to cool down before hitting the umbrella.

Generally, a larger umbrella is better so that there is a larger covered area beneath the umbrella especially when grilling.

A 5-foot to 7-foot wide umbrella will be large enough to cover the grilling space along with some sitting chairs.

So make sure to either have an umbrella large enough to accommodate all the items you want to be dry or shaded beneath the umbrella.

Another important factor when grilling under an umbrella, especially in bad weather, is how heavy or sturdy the umbrella base is.

Always make sure that the umbrella base is weighted and does not tip easily.

The worst scenario when grilling under an umbrella is having the umbrella tip over while grilling.

Useful Tips For Grilling Under A Patio Umbrella

Here are some useful tips to keep in mind when grilling under an umbrella.

Generally, grills should be placed at least 10 feet away from the home.

The benefit of grilling under a patio umbrella is that the umbrella can be moved to a different location. So choose a location that is far away from the home and any flammable objects.

Although having the grill closer to the home is more convenient for trips between the kitchen and grill, keeping a safe distance is more important.

Keep in mind that a table can be placed next to the grill under the umbrella so you can bring out all the cooking utensils and food that you plan on using on the grill.

When grilling on the patio or under an umbrella, it’s a good idea to remove any decorations or combustible objects that can catch on fire.

For example, low-hanging branches and plants should be moved away from the grill so that they do not dry out and potentially ignite.

If there is an object that is near the grill that cannot be moved then place a welding blanket or some other insulation material to prevent the object from getting too hot from the grill.

3. Have Fire Extinguisher Nearby

When grilling in general, a fire extinguisher should be nearby.

As a general rule of thumb, never leave the grill unattended.

Especially when grilling under an umbrella or on a wood deck, the grill should never be left unattended since uncontrolled fires can quickly spread.

Always keep an eye on the grill especially if there are pets or children around.

5. Do Not Use Lighter Fluid

Large flames and flare-ups should be avoided at all costs when grilling under a covered area like an umbrella.

So never use lighter fluid on a grill that is placed under an umbrella. The flash flame and high heat can damage the umbrella or start a fire.

Instead, use lower and steady heat to cook the food so that the umbrella does not get too hot.

Grilling outdoors is a great activity to bring friends and family together for some delicious meals.

However, if it starts raining outside then grilling under a patio umbrella is a good option to still be able to grill when the weather won’t cooperate.

Just remember to focus on safety when grilling since we want to avoid an uncontrolled fire from starting.

After you find the optimal location and umbrella height, you will be able to grill outside in rain or sunshine.

Just make sure to take all the necessary safety precautions when grilling under an umbrella and you’ll be able to enjoy summer foods all year round!