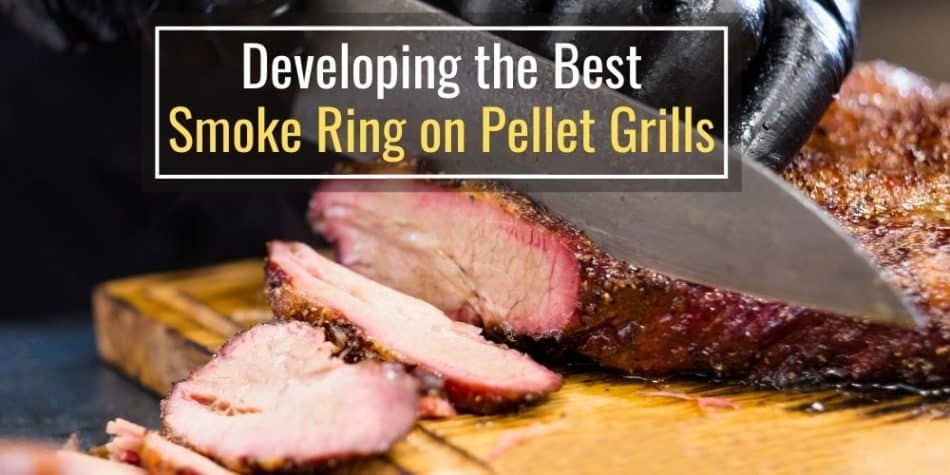 A common question I hear when smoking brisket on a pellet grill is whether or not a smoke ring will develop.

Thankfully, I have smoked countless briskets, ribs, and pork shoulders to figure out the best possible method for creating a smoke ring on a pellet grill.

The nitric oxide binds to the red myoglobin in the meat which is what creates the distinct reddish smoke ring.

So as long as the meat is being smoked with wood smoke then a smoke ring can develop over time including on a pellet grill.

Now let’s cover some tips on creating the best smoke ring on a pellet grill.

The first and easiest tip for creating a smoke ring on a pellet grill is by creating more smoke.

Check out this article for 5 tips on creating more smoke on a pellet grill. These are the 5 tips that I use in order to create more smoke on my Traeger pellet grill whenever I’m smoking brisket, ribs, or pork shoulder.

Use a Smoker Tube for more Smoke

These smoker tubes can be filled with the same wood pellets used in the pellet smoker and are simply ignited using a lighter or torch. After it starts smoking, the smoker tube is just placed inside the grill to produce extra smoke.

I recommend using this smoker tube that can be purchased on Amazon.

If one smoker tube along with the pellet grill is still not producing enough smoke then use two smoker tubes. Placing them on both sides of the smoker should provide complete smoke coverage and the food should develop noticeable smoke rings.

Using the “Smoke” setting of a Traeger

A common question I receive with Traeger pellet grills is if food can be cooked using the “smoke” setting.

After all, the smoke setting is even lower than 180°F so it should produce even more smoke.

Generally, the smoke setting on a Traeger will cook anywhere from 150°F to 180°F which is perfect for smoking meat “low and slow.” However, make sure to read this guide on cooking on the smoke setting of a Traeger since the p-setting may need to be adjusted in order to keep the fire burning.

If the outside air temperature is too cold and the p-setting is set too slow then the Traeger’s fire may shut off if enough wood pellets aren’t fed in fast enough.

However, both the “smoke” setting and other lower temperature settings on a pellet grill are perfect for creating smoke rings on meat.

Do Not Use Low Cooking Temperatures For Too Long

Lower cooking temperatures such as 180°F should not be used longer than 2 hours when the meat is first being smoked.

Meat must reach an internal temperature of 140°F within 4 hours to be safe to consume. Meat that remains in the 40°F to 140°F temperature range, also known as the “Danger Zone,” for too long will be unsafe to eat.

Read this article to learn more about why 180°F should not be used to smoke meat the entire time.

Do NOT Use High Temperature Settings

Pellet grills are versatile cooking machines that can not only smoke food but also grill, sear, and even bake food.

So the temperature setting is what will control how fast the food cooks and how much smoke the food is exposed to. When set to a high temperature such as 450°F, a pellet grill can sear a steak.

Moreover, pellet grills set to high-temperature settings will not produce very much visible smoke. The induction fan will be blowing the entire time to create a hotter fire which generally will not produce much smoke.

Essentially, use a low cooking temperature over 2 hours in order to create a smoke ring on a pellet grill.

Does Food need to be Flipped on a Pellet Grill?

A common question I get asked when smoking food on a pellet grill is if the food should be flipped mid-way through the cook?

Pellet grills are similar to convection ovens where both heat and smoke are blown throughout the cooking chamber which means all sides of the food are being cooked at the same temperature. There is not an open flame that is cooking one side faster than the other.

So the food that is being smoked on a pellet grill does not need to be flipped.

After the meat has absorbed smoke for two hours at 180°F or 225°F then the pellet grill can be turned to a higher cooking temperature if needed. The smoke ring will not continue to develop as the meat cooks beyond the first two hours.

Similar to pellet grills, smoke rings can be created by smoking “low and slow” on stick burners and other smokers that use wood smoke.

Just make sure to allow the meat to soak in all the smoke and nitric oxide in order to create that beautiful reddish smoke ring.