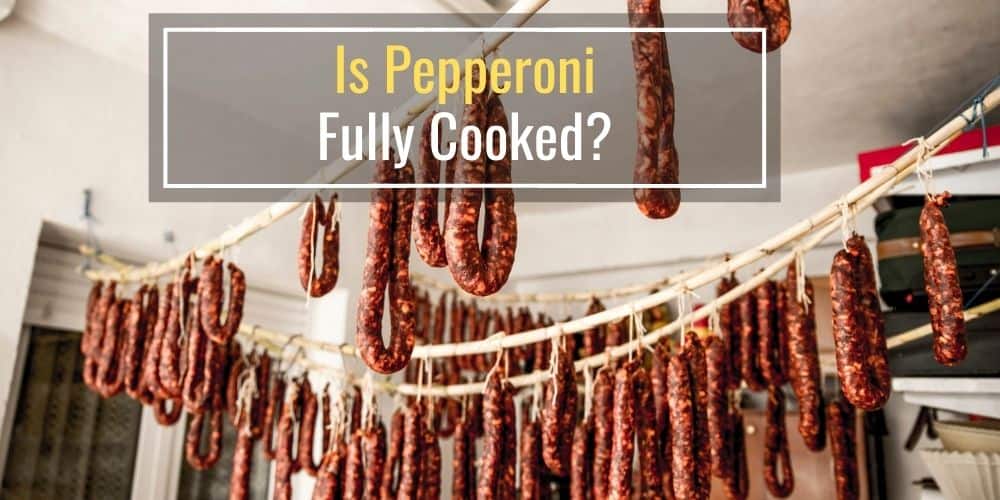 Pepperoni is a cured meat that can be frequently found on pizza.

Like most cured meats, pepperoni can be eaten straight from the package or placed on a pizza to add that extra zest.

However, this made me wonder, if you can eat pepperoni straight from the package then is pepperoni already cooked?

After all, you’re not supposed to eat raw meat.

So is pepperoni fully cooked?

Generally, pepperoni is not fully cooked but cured. The curing process makes the pepperoni safe to eat from the packaging without needing to be cooked first. However, pepperoni can also be cooked and eaten.

Although at first, it might seem strange that you can eat meat that technically hasn’t been cooked.

We’ll explore how the curing process makes cured meats like pepperoni, salami, and prosciutto safe to eat without needing to be cooked first.

What Is Pepperoni Made Of?

As stated above, pepperoni is a cured sausage that is not fully cooked because it usually does not undergo any cooking process.

Given that pork should never be eaten raw or undercooked, how can pepperoni be eaten straight from the package without being cooked?

Let’s cover how pepperoni is cured and made safe for eating even if the pepperoni isn’t cooked with heat.

How Is Pepperoni Made Safe for Eating?

The fermentation process involves a mixture of curing ingredients, such as salt and sodium nitrite, as well as some lactic acid-bacteria culture that will act as the “starter” culture.

The pepperoni sausages are then allowed to dry over a period of time which will cause the meat to lose a lot of its moisture and enhance the flavor of the meat.

Generally, cured meats will have a more intense flavor than uncured meat and the cured meat will also be more shelf-stable.

Now that you understand the curing process behind making pepperonis, let’s cover the typical pepperoni ingredients.

The recipe we provide here is the traditional method for preparing pepperoni.

Below we will cover the high level steps used to create pepperoni.

Sugar is sometimes added as a fermentation agent to enhance the flavor; that is, sugar increases the acidity required for fermentation since the meat is low in acids.

The next step involves treating the meat.

You can use various treatment agents such as sodium nitrate or sodium salts to remove excess water, slowing down bacterial growth in your mixture.

The other nitrate gives the meat an attractive red or pink color, which otherwise will be greyish to the eyes.

The removal of water occurs at three levels:

Then the mixture is placed in a refrigerator and left there for about three days.

After these three days, the mixture is removed and put in casings made from meat and pork intestines to maintain the sausage shape and then placed back in the refrigerator for another day.

The final step requires hanging the pepperoni in a cool area for a couple of days or several weeks to let it dry and complete the fermentation process.

Lactic acid bacteria extracted from yogurt or cheese must be injected into the meat to achieve complete and effective fermentation.

The bacteria helps lowers the pH level of the meat for better fermentation.

Sometimes the pepperoni is given a smoky flavor by smoking it in a smoke chamber for about 11 hours to a month, depending on the size and amount of meat. However, if you want to use your pepperoni on a pizza then you might skip the smoking process.

Can Pepperoni Be Eaten Straight From The Package?

Pepperoni can be eaten straight from the package since pepperoni is a cured meat and not raw. Although pepperoni is not fully cooked, the curing process makes pepperoni safe to consume.

Although pepperoni is cured and can be eaten straight from the package, you can still cook pepperoni.

So toss a few slices of that cured pepperoni on your pizza and add that nice zesty flavor to your pizza.

Pepperoni is a cured sausage that can be eaten straight from the package or cooked on a pizza.

Similar to eating salami or prosciutto straight from the package, pepperoni undergoes a similar curing process making pepperoni safe to consume without being cooked.

Not to mention the curing process has likely made your pepperoni taste even better and has extended the shelf-life of the pepperoni.

Although pepperoni is technically not fully cooked, pepperoni is still safe to consume since it is cured and pepperoni can still be cooked and eaten.

So you can put your worries to rest the next time you start snacking from that package of pepperonis.

Although technically not cooked, the pepperoni is still safe to eat whether you decide to cook it or not.