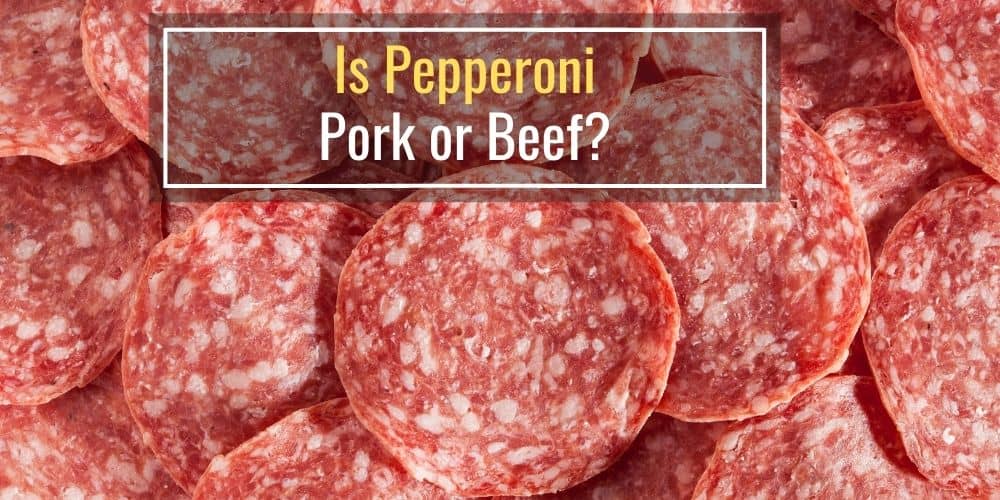 In most cases, we end up eating a slice of pepperoni pizza without even batting an eye as to what type of meat we’re actually eating.

After all, pepperoni adds that nice tasty zing to any slice of pizza so why question what’s in it?

However, if you are on a diet or are curious as to what you’re actually eating then you might start wondering what meat is in pepperoni.

This begs the question, is pepperoni sausage made from pork or beef?

Generally, pepperoni is made from a mixture of beef and pork. However, you can find pepperoni that is made entirely out of only one meat such as beef, pork, or turkey.

Most pepperoni that is consumed in the USA, such as those commonly found on pepperoni pizza, is made from a mixture of beef and pork.

Now let’s dive in and show you how you can determine whether the pepperoni you’re eating is pork, beef, turkey, or some sort of mixture.

What Is Pepperoni Really?

If you’re familiar with the Italian language, you’ll know that the word pepperoni is borrowed from the word peperoni, the plural of peperone which is Italian for bell pepper.

Interestingly enough, pepperoni is neither an Italian dish nor does pepperoni have anything to do with bell peppers.

Pepperoni is a form of cured sausage, most similar to salami.

Unlike regular sausages that need to be grilled before being eaten, cured sausages can be eaten without having to cook them. You’ll regularly find cured meats on charcuterie boards such as salami, prosciutto, and even pepperoni.

A pepperoni sausage usually consistents of ground meat and spices that are formed into a sausage. The sausage is then smoked or cured in order to add flavor and help preserve the meat.

The end result is a pepperoni sausage that is dark red in color with speckles of fat and spices.

The pepperoni sausage can be sliced into the pepperoni circles that we’ve all come to know and love on pepperoni pizza.

Where Was Pepperoni First Made?

However, pepperoni was invented in New York City by Italian butchers and pizzerias back in the 1900s. Pepperonis were originally used as a pizza topping and were considered an exotic pizza topping until gas ovens became popular in the 1950s.

So Americans can proudly say that Italian-Americans were the first ones to invent pepperoni in America which makes pepperoni an American food.

What is Pepperoni Made Of?

Even when you go to a butcher or purchase pepperoni from a grocery store, the odds are that the pepperoni is made from a mixture of both beef and pork. So most pepperoni consumed in the USA is a red meat.

Thankfully, when pepperoni is packaged, you can check the back of the packaging to determine what meat was used to make the pepperoni.

There are other types of meat that can be used to make pepperoni such as only beef and even turkey.

So if you are looking for pepperoni without pork then look for either turkey pepperoni or halal pepperoni.

Now pepperoni is not just bland meat that is cured into a sausage. There are a variety of spices that get added in order to create that spicy zing that most pepperoni has.

Generally, the meat is seasoned with black pepper, crushed red pepper, paprika, fennel seed, and garlic before being formed into a sausage and cured.

There is a common misconception that pepperoni is a cooked meat.

Pepperoni is a cured meat that does not go through a cooking process. However, pepperoni does go through a curing or preservation process that helps extend the shelf-life of the pepperoni as well as add some additional flavor.

See this article to learn more about whether or not pepperoni is considered fully cooked.

How Is Pepperoni Made?

Generally, the ground meat will be mixed with spices and flavorings. Afterward, preservatives such as salt and sodium nitrate are then added to cure the meat. The meat mixture is then fed into a sausage casing in order to create a pepperoni sausage.

The pepperoni sausage may also be smoked or air-dried in order to cure the pepperoni even further.

The end result will be a pepperoni sausage that is dark red in color and can be eaten directly from the package.

This curing process helps prevent the growth of microorganisms and slows down the speed at which the pepperoni spoils. So you will have plenty of time to enjoy the pepperoni before it goes bad.

Are There Other Types of Pepperonis?

Although pork and beef are the most common meats in pepperonis, there are various alternatives meats that pepperoni can be made with. There are turkey, venison, and even vegan pepperoni options available in most stores.

Although turkey alternatives usually do not taste as good as their red meat counterparts, turkey pepperoni tastes surprisingly very good.

The flavor of turkey pepperoni vs beef/pork pepperoni is similar since the seasonings play a big role in the pepperoni’s flavor.

If you’re not a fan of turkey then there are other meat alternatives for pepperoni including venison. Generally, venison pepperoni or sausages can be found at butchers since that’s where you can usually find deer meat.

If you don’t have a butcher nearby then you can usually find venison pepperoni online.

Finally, if you do not want to eat meat but still want to eat pepperoni then there are vegan alternatives. The ingredients used in the plant-based pepperonis are usually soy proteins, beans, and veggies.

All these veggies form a mixture that creates a realistic-looking sausage. Now for the taste, if you can get the spices right, you’ll get a similar taste too!

Pepperonis have a very strong flavor. Due to its intensity, you should not consume it whole. You’ll mostly see it cut up in very thin slices so that the flavor is not too strong.

On top of that, pepperonis are very chewy in texture. So, it’s difficult to take large bites of a pepperoni sausage and not have the flavor and texture overwhelm you.

This is why you will usually find pepperoni thinly sliced when being eaten.

So the next time you bite into a pepperoni pizza, you’ll know the type of meat that was used to create the pepperoni.

Generally, pepperoni is made of a mixture of both pork and beef. However, there is pepperoni that is made of only one meat such as beef, pork, or turkey.

However, you can find pepperoni that is made entirely of one meat such as beef, pork, or turkey and you can even find vegan pepperoni. So even if you’re on a diet, you can still enjoy pepperoni on your pizza!