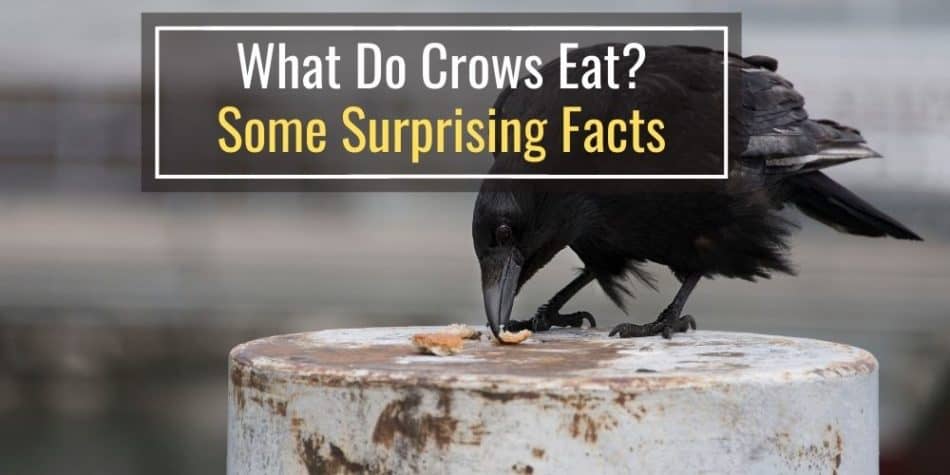 Crows are very smart creatures. They use tools and even recognize faces!

One of the most intriguing things about crows is their diverse diet.

So when it comes to the food that crows eat, some people think that crows only eat trash. While others may have seen crows steal eggs from the nests of other birds.

So what do crows eat?

Crows are omnivores, where they eat a wide variety of foods, including rodents, reptiles, eggs, amphibians, and even carrion. Crows will also eat insects, grains, fruit, seeds, nuts, worms, mollusks, and even other birds.

Now that you know what crows eat, you can let go of the notion that crows only eat trash. In truth, crows are smart enough to work together when trying to find food.

There is even a story of how crows distract other birds from their nests so that they can steal their eggs. One crow does the job of distracting the adult birds, after which other crows can come in to grab the eggs.

Now let’s dive into how smart crows are when it comes to finding food as well as if you can feed your local crows.

How Smart Are Crows When It Comes To Finding Food?

Smartness has always been associated with an animal’s higher likelihood to thrive. Crows are usually seen as intelligent creatures due to their problem-solving abilities.

To begin with, the brain of a crow is mostly similar in size to a human thumb. Even though there are lots of animals that have the same brain size, crows keep astonishing scientists.

A crow’s intelligence is a clear indication that there is no direct relationship between brain size and intelligence. That’s in consideration that a crow’s smartness is just about the same as that of a human that is 7 years old.

In a collection of stories titled Aesop’s Fables, there is a story of how one crow dropped pebbles into a container with water so that the water level could rise, allowing it to drink. Well, you may be surprised to learn that the story is not just a story.

Here are some of the most notable ways by which crows have portrayed their smart nature:

Can You Feed Crows?

A common question I hear is if you can feed crows.

Yes, you can feed crows, and if you are trying to find the way to a crow’s heart, this is probably the easiest.

One thing that you might want to keep in mind is that when you feed one crow, they will more than likely bring some friends next time they come back. Feeding crows regularly means that they will keep coming back since they will see you as an easy source of food.

There have been some claims that pouring out food to crows can attract mice and rats which sort of makes sense, since these rodents will also be looking for food. While that may seem like a caveat that you need to be wary about, remember that crows love eating rodents, so that’s not anything to worry about.

Some people are worried that since crows are wild animals, feeding them is not good since it encourages an unnatural dependence.

Well, this philosophy is quite accurate for other wild animals, but not exactly for crows. Keep in mind that crows have had a relationship with humans for quite a while – an arguably symbiotic relationship.

What’s more, crows have multiple sources of food considering that their feeding range goes up to 40 miles.

For these and other reasons, feeding crows and then suddenly stopping will not have an adverse effect. The crows will simply move on to an alternative and easy food source, so you should not be worried that they will grow dependent on you.

Before you start feeding crows, it’s important that you know what you ought to do to make friends with them. Here are a couple of tips to get you started:

Crows have been said to eat just about anything, but it’s also good to be aware of the fact that they can be quite particular in their tastes. As such, if the crows don’t like the food that you put out for them, they will more than likely ignore it.

Not to worry, though, as you can easily figure out what they like most by watching how they respond to the different foods that you offer them.

Some of the things that crows love – even though they are also highly likely to attract songbirds – include:

You can check out this article for a list of some of the foods that crows like and don’t like to have a better idea of what to give the crows in your neighborhood.

You may be surprised by the variety of food that crows like, including nuts like walnuts and almonds, so try offering different food to your local crows and watch how they respond.

2. Have A Supply of Crow Food

If you’ve made up your mind to feed the crows in your neighborhood, then it’s important to ensure that you have enough food to keep them happy.

That means buying and stocking enough peanuts or whatever food you choose so that you won’t run out.

If you want your relationship with these amazing birds to gel, you have to create a rhythm for interaction.

Crows, like any animal, will start to recognize a pattern if you feed them every morning or every evening. The crows will start coming around at that specific time to say hi and also get a tasty treat.

You are not trying to replace the crows’ natural food source, so don’t feed them to a point where they start becoming dependent.

While crows will quickly and easily get another food source, you just want to give them a handful of what you have just to show that you care.

5. Be Consistent and Reliable

It’s important that as you feed the crows, you try to not only be consistent and reliable but also observant.

You should aim to understand your crow family as much as you can, and one of the best ways to do that is by observing from a respectful distance.

6. Avoid Getting Too Close

Crows, being wild animals, will require some space.

You don’t want to try to treat wild crows as pets or tame them in any way. Even after you have been friends with a particular crow for years, the crow may still be skittish and standoffish.

That’s natural and it’s best that you keep it that way so the crow can still find its own food if you ever decide to stop feeding the crow.

Is It Bad or Illegal to Feed Crows?

It’s not outright illegal to feed crows, but it’s always crucial to check your local jurisdiction to be sure about the laws that govern the feeding of different wild animals.

Keep in mind that there are some wild animals that have the potential of being a nuisance.

Not only that, but it’s also important to appreciate the fact that your neighbors could see crows in the area as being problematic even when you don’t.

For this reason, it’s advisable to check in with any nearby neighbors before making the decision to feed crows, to ensure that they are okay with having the birds around.

Be aware that crows have also been linked with destroying gardens as they look for caterpillars and other bugs that they can eat. On the positive side, your garden will be free of garden pests, which may translate into a more beautiful and healthy garden.

So, as long as you are not violating any laws or raising concerns among your neighbors, you can go ahead and feed your flying friends.

Crows are not dirty birds that will just eat litter and roam around dirty yards or dumpsites. Well, they might do that if the crows can find an easy food source that suits them, but it’s good to know that they are omnivores which means that they have a wide range of food they can eat.

Generally, crows are omnivores, where they eat a wide variety of foods, including rodents, reptiles, eggs, amphibians, and even carrion. Crows will also eat insects, grains, fruit, seeds, nuts, worms, mollusks, and even other birds.

So if you are looking to better understand what crows eat so that you can feed them, now you know that you have a wider variety of foods to choose from.