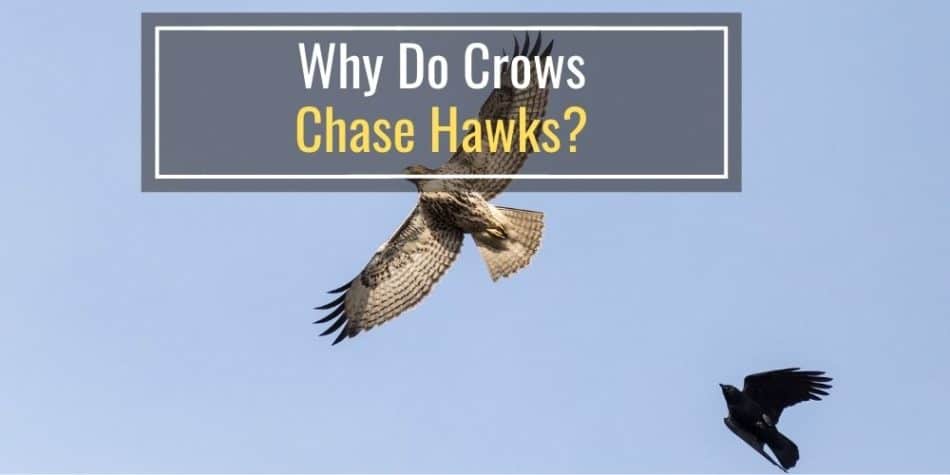 Crows and ravens belong to a bird family known as Corvidae.

Generally, these species are notorious and mischievous birds to humans and pets. They will look for food in your trash bin and cause a mess while at that. Plus, they will tease your cats and dogs and even chase away predators such as hawks.

So why do crows chase hawks?

Crows chase hawks when they feel threatened by the hawk’s presence. Generally, a crow will become offensive if it thinks it has to protect itself or its babies from a predator. The crow will antagonize the hawk until the hawk flies away.

Birdwatchers have spotted crows chasing hawks many times especially when the crows outnumber the hawk.

Note that while crows are mischievous they are also very intelligent.

Keep reading this article to learn more about crows and what causes them to chase hawks away.

Crows and Their Mobbing Behavior

Mobbing refers to when a bird of a smaller species chases a bird of a larger species. Small birds will mob out and attack the large birds, which are mostly perching or gliding. Other birds apart from crows can also mob. These include sparrows and ravens.

Birds mob when they perceive the larger bird as a threat. Smaller birds such as crows and sparrows cannot scare away a predator on their own. However, in a crowd, they gain the confidence and bravery to chase away larger birds.

Mobbing birds aren’t killers. They only do this as a defense mechanism to protect their habitat, nests, eggs, food sources, and themselves.

Keep in mind that crows are omnivores so they eat just about anything which means they might have a lot of things to protect.

Mobbing is a common behavior in crows. People often wonder why these small birds would attack large powerful birds like hawks. This is often because of crows mobbing behavior and tactics.

Crows will chase away hawks and other large birds in groups in order to protect themselves or their nesting area. However, what is more surprising, is that while the crows are chasing after the hawk, the hawk doesn’t defend itself.

Why Don’t Hawks Fight Back?

If hawks are such large and powerful predators then why don’t they attack any smaller birds that are chasing them away?

The surprising thing is that the predatory bird will usually fly away instead of attacking back. So why don’t hawks retaliate? Research has found several reasons for this.

One surprising reason is that hawks are not aggressive.

Hawks have the strength and talons to fight and defeat a crow, but they usually don’t. Despite their small size, crows are clever birds that can be difficult to pin down. So crows would be able to maneuver and be too challenging for a hawk to easily kill.

If the hawk did decide to fight back, the hawk would use too much energy so the hawk decides to not fight back and waste its energy. This doesn’t mean hawks are lazy.

Hawks just choose to conserve and use their energy for more constructive things like catching and eating prey. Thus, hawks will decide whether a battle is worth fighting or if it’s easier just to fly away.

A hawk understands that it can’t take down a group of mobbing crows at the same time. So, instead of risking injury or death, the hawk chooses to fly away.

Therefore, you’ll not see crows mobbing a hawk near the hawk’s nest.

Why Do Crows Attack Hawks?

Most times, it’s because they can. Hawks and crows are viewed as arch enemies. In fact, adult crows are said to teach their little ones about hawks. These species are genetic enemies. As such, even if the crow hasn’t met a hawk before, it will still be disgusted by it and vice versa.

Hawks have sharp talons and beaks that can easily tear flesh. On top of that, hawks can fly more than 190km/hour in the air.

Crows, on the other hand, are regular birds with ordinary feet and pointy bills. The top flying speed of a crow is at 100km/hour. Experts believe that if a hawk retaliates and grabs a mobbing crow, it is as good as dead.

But do crows know this? Crows, although ordinary and small, are very intelligent. They have a unique and intricate social structure that consists of groups. A crow knows that it doesn’t cause much fear on its own. Therefore, it will not risk attacking a hawk alone.

Instead, the crows will attack the hawk in groups. Many crows will thus descend from trees to chase one hawk. They usually jump behind it in turns, and the attack can be aggressive if crow babies are involved. In this case, large crows can go to an extent of capturing the raptor using their feet or beaks.

Yes, mobbing crows can kill a hawk but it is very rare. Most times, the mobbing birds don’t intend to cause physical harm. They only do it to bully the other bird so that it can fly away. And in most cases, the large bird will do so, especially when the mobbing gets unbearable.

We should also mention that hawks don’t fly away because they are scared of crows. Instead, the hawks choose to ignore the crow unless it is near the crow’s nest.

Crows are among the smartest birds and can even chase off predators such as hawks. Crows utilize any opportunity they get to mock and chase off their enemies. It’s common for crows to chase away hawks.

Even if hawks have the capability of attacking and killing a crow, the hawk would rather go for easier prey. Hawks want to use their energy wisely and spend as little as possible to catch a meal. Spending energy on catching a crow could lead to the hawk getting injured which isn’t worth it to the hawk.

So when you see a group of crows chasing a hawk away, now you know why the crows are chasing the hawk and why the hawk will usually decide to just fly away.