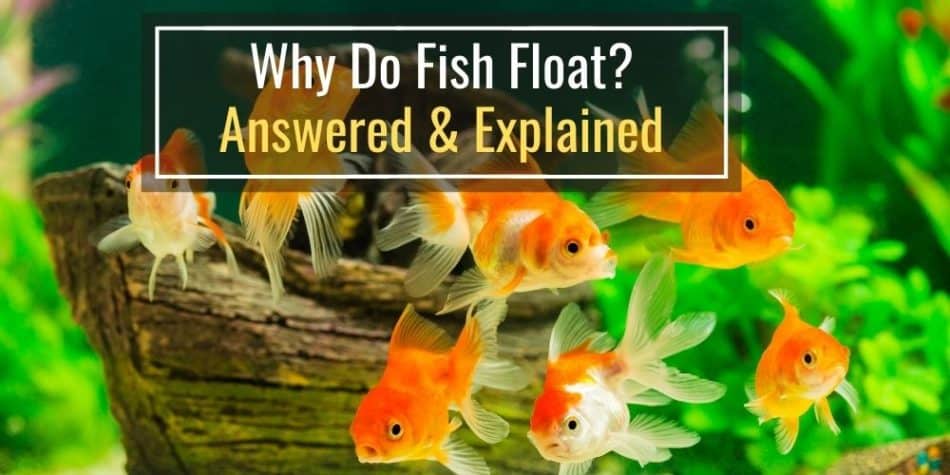 It is pretty amazing how fish and other aquatic animals can just decide to sink and float in the water at any time.

Since humans tend to always float when in water, it made me wonder how do fish float and sink?

Here is the scientific explanation behind a fish’s buoyancy:

So essentially the fish uses the swim bladder to help the fish float or sink at any time.

Essentially, any object, when immersed in a liquid (in this case, fish in water), is affected by gravity and buoyancy force. Gravity is responsible for pulling down objects, whereas buoyancy force does the complete opposite.

If the object’s weight is less than the buoyancy force, it will float, but when both are equal, the object can stay in the same position.

Density is also a fundamental factor affecting the object’s ability to float. The general rule is that denser objects sink while the less dense ones float.

The swim bladder is responsible for regulating all these factors.

How The Swim Bladder Works

The swim bladder, otherwise known as the air bladder, is an expandable sac synonymous with lungs in human beings.

The buoyancy organ is strategically positioned in the body cavity of most bony fish.

The main functions of the swim bladder include:

Remember the general rule of density?

Well, a fish uses the swim bladder to regulate its density. When the bladder is inflated with oxygen, it expands as the volume of the fish increases, but its mass increases by a negligible margin.

Consequently, the fish is filled with oxygen and displaces a volume of weight equal to its body weight. The fish is pushed upwards with the increase in volume.

The opposite happens for the fish to sink. To maintain a certain level, the fish regulates the amount of oxygen in the bladder to displace the required volume, while gravity and buoyancy forces cancel out.

Deformation of the swim bladder can lead to mild to severe consequences, including death in fish. However, the disease can be corrected or treated depending on the seriousness.

The fish’s most apparent signs of swim bladder sickness include abnormal behavior such as inactivity, reduced appetite, and an upside-down position.

Do Dead Fish Float or Sink?

Generally, when a fish dies, the fish will remain near or close to the bottom for some time. Over time, a dead fish will float once the gases inside the fish from decomposing build up.

Why Do Fish Float When They Die?

Since a fish has a relatively higher density than water, the fish will sink in the water at first.

However, a dead fish can be compared to a closed container. Thus it cannot regulate the amount of air it takes in. As it decomposes, other gases are released, filling the organism’s body cavity.

Over time, the air fills the fish until the dead fish begins to float to the surface.

Do Fish Float When They Sleep?

Why Is My Fish Floating Upside Down But Still Alive?

A living fish in an upside-down position is a bad sign. Fish swimming upside down is usually an indicator of swim bladder disease or a dying fish.

A malfunction of the swim bladder can be detected in its early stages when you notice a reduced appetite or sideways swimming in the fish. The disease primarily causes buoyancy issues.

Swim bladder disease may be caused by a temporary or permanent defect on the swim bladder caused when the fish swallows too much air, is injured, or has a swollen belly due to constipation, poor eating habits, or bacterial infections.

A sick fish should be treated as soon as possible as swim bladder disease can be life-threatening.

Why Is My Fish Upside Down At The Bottom of the Tank?

If your fish has been upside down at the bottom of the tank for a while, then it could be suffering from a swim bladder disorder or the fish is dead.

The swim bladder disease affects the fish’s ability to control the amount of air it takes in so the fish will be upside down in the fish tank.

However, if the fish is upside down at the bottom of the tank and the gills are not moving then the fish is likely dead.

Why Is My Fish Upside Down and Not Moving?

The two main reasons a fish is upside one and not moving are:

Although a dead fish will eventually float to the surface, a fish that recently dies may sink at first.

A living fish with a swim bladder disorder may be upside down due to the lack of balance. So watch the fish for a bit before determining whether or not the fish is dead or is having a swim bladder issue.

However, keep in mind that some fish may prefer to be near the surface of the water while others prefer to be at the bottom.

In fact, some bottom-dwelling residents of the deep-sea do not have swim bladders. Perfect examples include cartilaginous fish such as sharks and skates. To compensate for the absence of a swim bladder, they have blighter skeletons and carry oil in their livers.

However, for most other fish, the swim bladder is what regulates the amount of air in the fish which helps fish float.