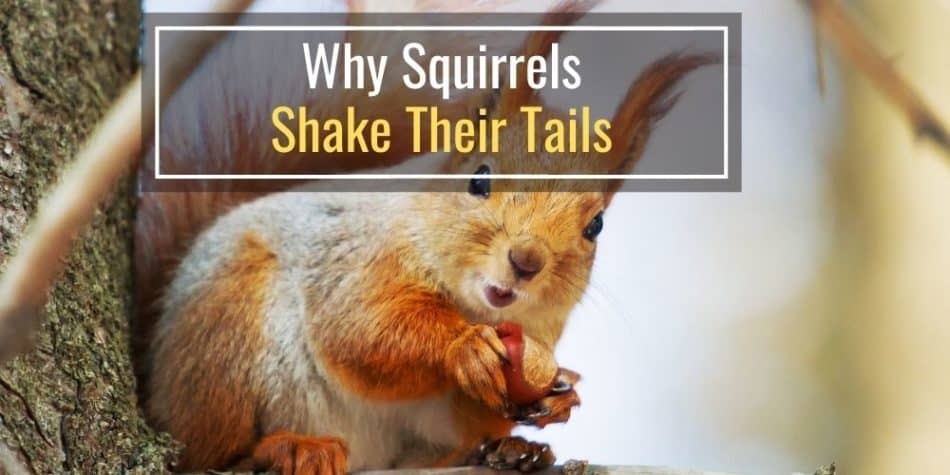 Squirrels are cute and social little creatures that frequently shake their tail throughout their day. There are several reasons why a squirrel is shaking its tail.

However, here are the primary reasons squirrels shake their tails:

So squirrels are vocal little creatures that shake their tails when talking to other squirrels.

Now let’s find out more about why squirrels shake their tails.

Why Is The Squirrel Shaking Its Tail?

Here are some things that will cause squirrels to shake their tails:

1. A Predator In Sight

A squirrel would start shaking its tail when a predator is nearby.

For example, if there is a coyote, hawk, other animals, or even humans then the squirrels will start wagging their tails.

If a dog is chasing the squirrel up a tree, don’t be surprised when the squirrel starts chirping and shaking its tail at the dog.

Squirrels also wag their tails when trying to find a mate. When it’s the mating season, you can spot the male squirrels going after the female squirrels.

Shaking the tails is a way of letting the female squirrels know that the male squirrel is interested.

Squirrels like to prepare for winter and will store their food in a tree or other locations. So squirrels will want to protect their food from any other hungry squirrels.

Squirrels will shake their tail and chirp in order to let other squirrels know that they are getting too close to their food.

Essentially the squirrel is saying “that food belongs to me!”

Not all species are like that, but those who defend their territory will let other squirrels know by shaking their tails.

A squirrel wants other squirrels to know if there is danger or if there is other news to share. It’s a way of helping out their fellow squirrels.

So, when a squirrel senses a predator on the ground or in the air, it shakes the tail. The squirrel could be saying, “Watch out; there is something weird that can harm us all.”

Squirrels may also shake their tail when they find a lot of food such as a human dropping peanuts on the ground. The squirrel can let others know of the feast in case they are hungry.

When the squirrel feels frustrated, you can see it tell it from the tail! So yes, the squirrel’s tail, which keeps its warm and is a distinct feature to miss, plays an integral role in communication.

Balancing When Moving On High Areas

Next time you see a squirrel moving on high areas, you may also notice that the tail moves.

However, squirrels use their tails for balance when jumping from tree branches or climbing in high areas. Although the squirrel may not be shaking the tail, the squirrel is moving the tail to keep balance.

Other Interesting Facts About Squirrels

The furry little squirrel that you may see every day from your kitchen window shows an interesting behavior through its tail, but that’s not all. Here are some other amazing fun facts.

A squirrel’s tail serves multiple purposes for a squirrel. From communicating to temperature regulation to even a way of balancing! A squirrel’s tail is a really powerful tool for squirrels.

When a squirrel’s tail shakes, there are a few reasons that can cause the tail to shake.

So if you observe a squirrel shaking its tail, watch closely to see if you can spot a predator or what the squirrel is trying to say to the other squirrels.

Here are some frequently asked questions with squirrels shaking their tails.

What to Expect When A Squirrel Is Shaking Tail?

When a squirrel is shaking its tail, the squirrel is trying to alert or communicate a message to the other squirrels.

What Do Squirrels Do When They Feel Threatened?

Squirrels are communal creatures so they will try to help each other survive.

Who Are The Common Predators of Squirrels?

In the past, humans have hunted squirrels, but it’s not that common now.

A squirrel would feel the danger from snakes, so if a snake is nearby, a squirrel can start shaking the tail.

Another common predator is a hawk that can attack and grab squirrels. Finally, owls are another predator that commonly hunts for squirrels.