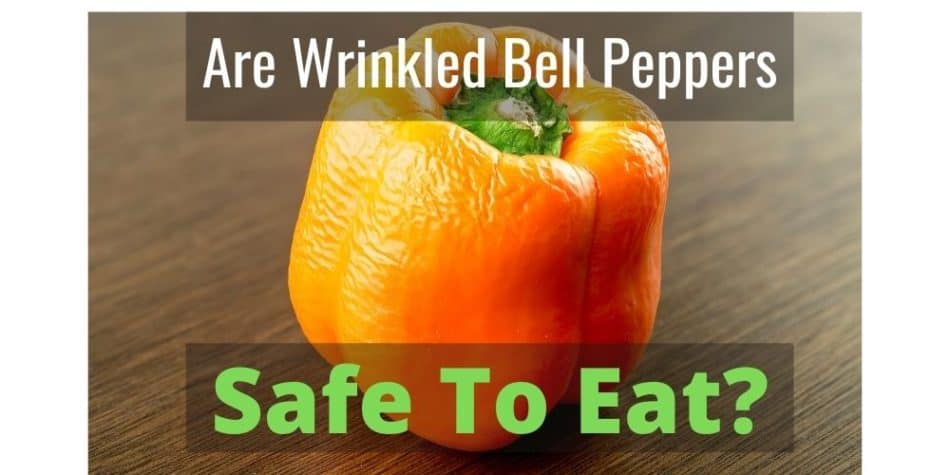 It happens to the best of us: you bought a whole bunch of fresh vegetables and completely forgot all about them. When you reach into your refrigerator, the beautiful bell peppers have become wrinkled and shriveled up.

So what do you do: toss them in your mouth, or in the trash? Can you eat wrinkled bell peppers?

The flavor of a cooked wrinkled or fresh pepper will be the same and cooking removes any texture differences.

Now that we know how to use a wrinkled bell pepper, let’s cover why they even get wrinkled in the first place. After all, you won’t need to save them if your peppers never get wrinkled.

Why Do Bell Peppers Become Wrinkled?

Just like raisins (and sadly, our sun-damaged skin), bell peppers become wrinkled because they have lost moisture.

It happens naturally because of evaporation, but the process can speed up if you leave them on the kitchen counter, or in the dry or arid section of your refrigerator.  Sometimes, you can find wrinkled bell peppers in the supermarket, usually sold at a discounted rate since they’re not in “prime” condition.

The good news is that wrinkled bell peppers aren’t spoiled yet. The peppers have just lost some of their crispiness and juiciness, but they can still be safely eaten.

However, you may want to change your menu. Wrinkled peppers aren’t suitable for salads or other raw dishes. Only fresh, firm peppers will give you that colour and crunch.

You can use wrinkled bell peppers for any cooked dish such as sautes, soups, and stir fries.

You can cut them into small squares or slices (simultaneously removing any bruised or very wrinkled parts). You won’t see any difference in the quality of the dish, because the heat will actually cause any vegetable to lose moisture.

By the time you serve your food, nobody will know that you salvaged a wrinkled bell pepper—it’ll be our little secret.

Another fantastic way of using your wrinkled peppers is to roast them.

Just put whole peppers on a baking sheet, sprinkle some olive oil, and place in an oven set at 450 F. You know they’re ready to take out when they have become charred, and start to collapse. Then, place the peppers in a bowl and cover them for 15 minutes. Do this while your peppers are still very hot, so it steams in its own juices!

After steaming, remove the skins, and voila—you have homemade roasted bell peppers!

Use this in dips, add to pasta sauces or any tomato-based dish. See, those wrinkled peppers have transformed into a gourmet ingredient.

Don’t have an oven? No problem. You can roast peppers on a grill, or hold them with tongs over an open flame.

Why not finish the job of dehydration since these wrinkly bell peppers are already dehydrating? Dehydration is the best way to preserve your bell peppers for up to a year.

Dehydrating bell peppers is simple. All you need to do is remove the seeds and dice the peppers into relatively uniformly sized pieces. Next, just spread all the slices in a dehydrator and set the temperature to 125°F for 12-24 hours.

Once finished, the bell peppers will greatly reduce in size so you can fit multiple peppers into a small container.

Dehydrated bell peppers can be rehydrated by letting them soak in hot water for 10-20 minutes. The rehydrated pepper will return to their normal size and will be soft which is perfect for cooking.

This means dehydrated bell peppers are ready-to-go peppers that can be easily added to soups, stews, and pastas.

Pro Tip: A study recommended blanching the bell pepper before dehydrating to retain the most amount of nutrients. This extra step isn’t necessary for preserving your bell peppers but helps keep them as nutritious as possible.

As you can tell, there are plenty of ways to make delicious meals and ingredients out of wrinkled bell peppers!

When Should I Throw Away Bell Peppers?

The most important signs of a rotten bell pepper are slime and mold.

If they feel wet and sticky when you touch them, or if they have already burst open and turned into a watery mess, then toss them immediately.

Sometimes when you cut open the pepper, you will notice that the seeds have turned black.

If you feel your peppers will soon go bad then scrape off any soft or bruised parts. If you can’t cook or roast them right away, you can wash them and do one of two things.

Before placing the peppers in the freezer, be sure to cut or dice them to your desired size. This will allow you to easily dump the frozen peppers into stews or hot pans when you want to cook them.

A pepper that is frozen whole can be more challenging to use since you need to thaw it out before being able to cut it.

As mentioned above, you can also dehydrate bell peppers to preserve them for up to a year in the pantry.

If your wrinkled bell pepper is beyond saving due to mold or slime then try composting it!

Bell peppers are great compost material that can break down into rich fertilizer for your plants. If you don’t have a composter then bury the old bell pepper into the ground.

Nature will turn your spoiled produce into next year’s bounty.