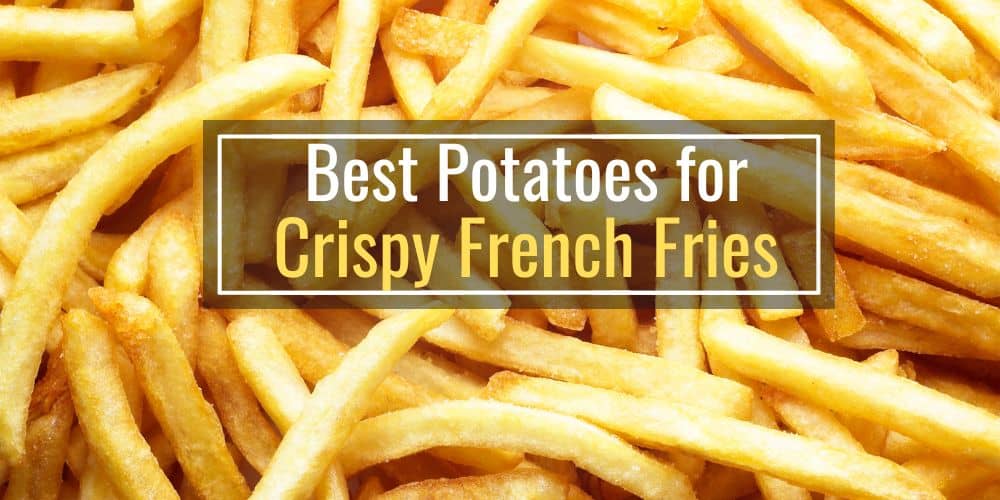 Making crispy French fries at home is an art that takes practice to perfect.

While there are a number of factors that contribute to the perfect french fry such as soaking the potatoes or double frying, the potato you choose is one of the most important steps.

So what are the best potatoes for crispy french fries?

Not to mention, russet and Idaho potatoes have lower moisture content which helps prevent the french fries from turning soggy.

Out of all the varieties of russet or Idaho potatoes, the Russet Burbank is the best potato to use for crispy french fries.

You may want to keep in mind that while russet potatoes are arguably the best for French fries, you also can’t go wrong with the Maris Piper potato. This variety of potatoes is, however, not as easy to find in the United States.

Now let’s cover all the factors to consider when selecting and creating the crispiest french fries.

You already know that russet potatoes are the best choice for making crispy french fries.

But what is it about these potatoes that make them so much better for frying than other potatoes?

As such, when you fry russets, they’ll turn out crispy and golden on the outside, while the inside will remain fluffy and light.

Although you will still want to soak your potato slices before frying to remove the surface starches, the higher starch content within the potato slices will create crispier french fries.

Another reason why russet potatoes are the best for french fries is because of their low moisture content.

This is important because potatoes with a higher moisture content will release more water when fried. This excess water will then cause the potatoes to become soggy and greasy.

So it’s crucial to always allow your potato slices to dry thoroughly before frying them.

In addition to having a high starch and low moisture content, russet potatoes also have powdery and fluffy flesh. This is important because it means that the potatoes will not have a mushy texture after being fried.

The Maris Piper and Katahdin potatoes are other varieties that have powdery and fluffy flesh similar to russet potatoes.

Generally, russet potatoes are usually an oval shape which means they are longer than they are wide.

The oval shape is perfect for making longer and thinner cuts of potato slices that will turn into crispy french fries.

Moreover, these potatoes will not lose their shape when you fry them, thanks to their solid-water ratio.

Other potato varieties that have a lower solid-to-water ratio will look shriveled after frying since the water will evaporate causing the french fries to shrivel up.

After all, air fryers have become increasingly popular in recent years as a healthier alternative to deep frying.

So what are the best potatoes to use in an air fryer for crispy french fries?

Potato varieties that have a higher moisture-solid ratio will, on the other hand, most likely become mushy when cooked in an air fryer.

That’s largely due to the fact that air fryers work by circulating very hot air around the food which will cause the water and moisture to evaporate.

Potatoes with a higher moisture content will shrivel up in air fryers as opposed to potatoes with higher starch content such as russet and Idaho potatoes.

Yukon Gold Potatoes: Are They Good for Crispy French Fries?

Yukon gold potatoes are another popular type of potato. But, are they a good alternative to russet potatoes when it comes to making french fries?

However, if you’re adamant about using Yukon gold potatoes, or you just can’t find russets, you can still fry them. Just keep in mind that you might not get the best results that you would get with russet potatoes.

Now you know that the type of potato that you choose is a crucial step in making crispy French fries, let’s cover the other important factors for the best French fries.

Generally, as long as the starch-moisture ratio is well-balanced then you’ll be on the right track.

Here are the other factors that come into play when it comes to making amazing french fries.

The type and age of the oil that you use will also play an important role in the quality of your French fries.

Ideally, you want to use an oil with a high smoke point, such as refined peanut oil. Sunflower, canola, corn, vegetable, and safflower oils are also great options.

The reason why oil with a higher smoke point is better is that these oils can withstand higher temperatures without breaking down. As such, it’s easier to achieve that perfect crispiness without burning the potatoes.

Moreover, when it comes to the age of the frying oil, you will realize that older oil will also make your fries crispier. But why is that? The older the oil is, the easier it will be for it to bond with the potatoes, making them crispier.

You will typically want to change the frying oil after about three to four frying cycles.

However, you will need to change your oil if you see any of the following signs:

Make sure to remove any small leftover potato bits in the oil in order to extend the lifespan of the frying oil.

Read this article to learn more about the best methods and oil for frying french fries.

When it comes to picking the right potatoes for french fries, you may want to opt for dried and frozen potatoes. One of the secrets that many professional chefs use is to dry and freeze potatoes before storing them for later use.

The process of drying and freezing is said to aid in increasing the starch content in potatoes by converting the sugar to starch. As such, your potatoes will be crispier and tastier when you fry them.

Not to mention the potatoes will be free of any excess moisture so you will end up with crispier potatoes that are not mushy or soggy.

When frying potatoes, you want to make sure that you do it in two cycles (double frying).

The first cycle involves frying the potatoes at approximately 375-400°F for one minute, then leaving the fries to cool. This process is beneficial in that it pre-cooks the inside of the potatoes and creates a protective crust on the outside.

After the first cycle is complete, you’ll want to fry the potatoes a second time at the same temperature until they are golden and crisp.

Double frying the potatoes will result in crispier french fries that have a pleasant crust and a soft and fluffy inside.

4. Soaking the Potatoes in Water

When using high-starch potatoes, soaking them in water will help to balance the starch-to-water ratio.

The water will pull out some of the excess starch from the potatoes. That way, your potatoes will have enough water in them to ensure that they don’t become over-cooked or get burned.

That’s not all. Excess starch on the surface of potatoes will make them more likely to stick to each other, especially if you add too many into the fryer at once.

So, by soaking them in water, you can also reduce the chances of your french fries sticking together.

I’d recommend trying different alternatives to find the best french fries for you.

So maybe Yukon Gold potatoes will create french fries that you enjoy better than russet potatoes.

It all comes down to personal preference so test out these tips the next time you’re in the mood for creating crispy french fries and figure out what works best for you!