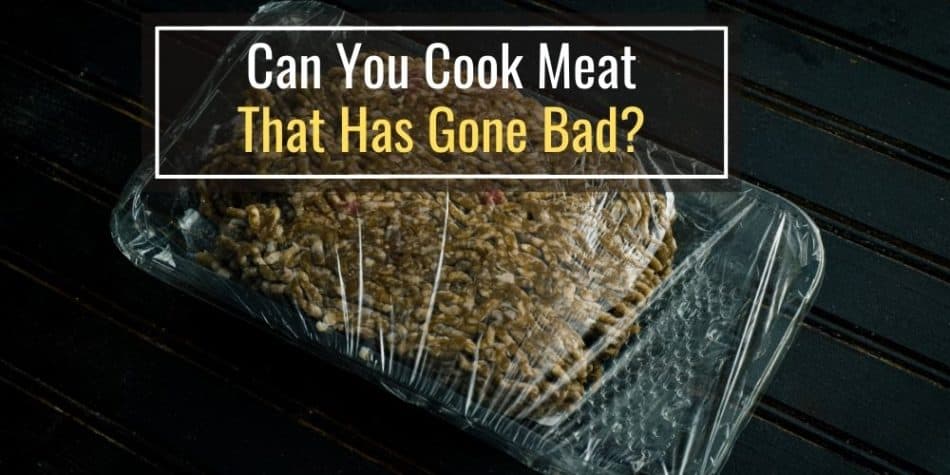 We’ve all been there, you go grocery shopping and you somehow forgot about that extra chicken or beef sitting in the back of the fridge.

Before you know it, the meat has gone bad which you can usually tell by the smell.

However, doesn’t heat kill germs so can you cook meat that has gone bad?

So while you can cook meat that has gone bad, you should not eat it. There are no health benefits from eating bad meat.

So DO NOT cook meat that has gone bad and eat it since this is a major health risk that is not worth taking.

How To Determine If The Meat Is Bad

When you buy meat and have stored the meat correctly in the fridge or freezer, there is still a chance that the meat has gone bad.

If the meat is frozen, you will need to thaw the meat out first before looking for any signs that the meat has spoiled and should not be eaten.

Here are the three signs that will let you know if the meat has gone bad.

The first sign that the meat has gone bad is the odor.

Fresh edible meat does not have an odor or if it does, it is very mild. The odor from fresh meat will not be unpleasant.

However, if the meat has gone bad, then the meat will have a smell that can be described as sour, sulfuric, or an ammonia-like odor to it.

If you cannot tell if the meat has spoiled based on the smell then look at the color of the meat.

The third sign that the meat has gone bad is the texture of the meat.

Usually, fresh meat is firm and can be handled relatively easily.

On the other hand, spoiled meat will have a slimy or sticky texture that can be difficult to handle.

So if your meat keeps sticking to your hand or if there appears to be a slimy film on the meat then toss this meat out.

How To Prevent Meat Spoilage

The US Food and Drug Administration does provide some guidelines to help you preserve your meat so you can safely cook and eat your meat at a later time.

One of those recommendations is to keep your meat stored in your fridge at 40°F. While another recommendation is to freeze your meat if you plan on eating the meat at a later date.

However, different meat products have different storage times before they start to go bad. So let’s cover the storage times for placing the meat in the fridge and freezer.

Here are the general timelines of how long meat can stay fresh in a fridge:

Now if you plan on eating meat at even a later date then you can freeze the meat to keep it fresh longer.

Freezing meat will help preserve the freshness of the meat even longer than the fridge.

However, if you keep the meat in the freezer too long then the meat’s texture may start to change and the meat will not taste as good. The recommended freezer temperature to store your meat products is 0°F.

Here are the general timelines of how long meat can stay fresh in the freezer:

Keep in mind that meat can be frozen indefinitely and still be safe to eat. However, the meat’s texture may change so much that you may not want to eat a steak that has been frozen for 5 years.

In fact here is a quote from the USDA that states meat can be frozen indefinitely:

Ground beef is safe indefinitely if kept frozen, but it is best if used within 4 months. Refrigerate or freeze ground beef as soon as possible after purchase. This preserves freshness and slows the growth of bacteria. It can be refrigerated or frozen in its original packaging if the meat will be used soon.

US Department of Agriculture

The reason why you do not want to just freeze all your meats is that the quality and flavor of the meat will deteriorate over time if you forget about your meat in the freezer for too long.

Here is a quote from the National Center for Home Food Preservation on meat’s quality and flavor deteriorating over time:

The Food Marketing Institute recommends a 1 month storage limit for unopened bacon. Our maximum recommendation would be 1 to 3 months for bacon and cured meats. The longer you store it, the more the quality and flavor will deteriorate.

Here are the food safety temperatures for meat:

So generally meat needs to be cooked until the internal temperature reaches 145°F except for poultry which needs to reach 165°F.

Meat That Has Gone Bad Can Make You Sick

When you cook and eat bad meat, you can get mild or severe cases of food poisoning. So there is a risk when eating bad meat even when it is cooked.

Eating spoiled meat or food, in general, can lead to food poisoning.

Like identifying bad meat, food poisoning also has several signs that let you know you are sick.

Signs of food poisoning will usually show up 8 to 48 hours after consuming the spoiled meat. Food poisoning is not always evident immediately after eating bad meat.

Some signs of food poisoning include:

There are other minor signs but when you get a severe case of food poisoning, you may experience vision trouble and paralysis.

Pregnant women and children, along with those who suffer from chronic illnesses should avoid any meat suspected of being rancid.

There is usually not a lot you can do when you contract food poisoning from eating bad meat.

For mild cases of food poisoning, your immune system can get rid of the illness within 7 to 10 days.

Those who are more vulnerable to food poisoning may take a little longer for their systems to clear the bacteria out of your system.

Meat is a great ingredient that can be safely preserved in the fridge or freezer for different lengths of time.

Depending on when you plan to use the meat, you can safely store the meat in the fridge or freezer.

So make sure to trust your nose and eyes when determining if the meat has gone bad.

And never eat meat that has gone bad, it’s simply not worth the risk.