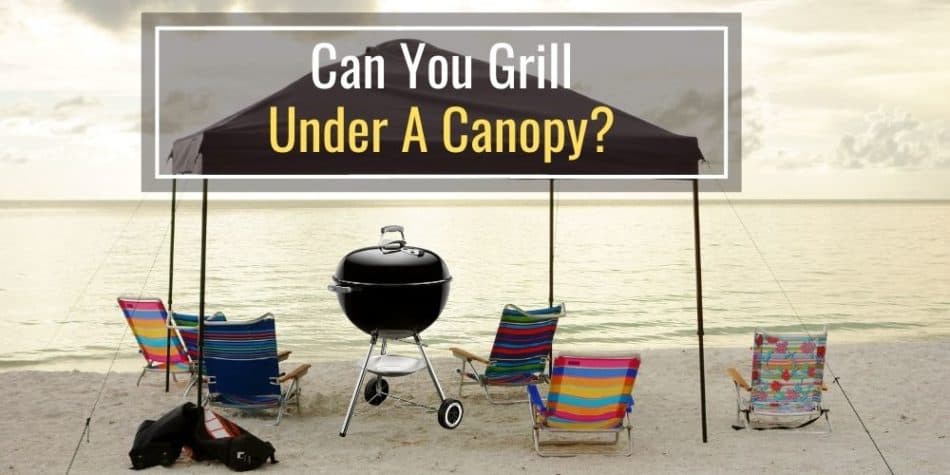 Unless you own a house with a covered porch or balcony, sooner or later, you will find yourself in a situation where you need protection from rain or snow while grilling.

Grilling in the off-season or during bad weather is still possible when the right plan and gear.

Whether you are having a picnic in the park or in the comfort of your garden, a canopy can come in handy when the weather doesn’t cooperate with your outdoor plans.

After all, canopies can be seen at every football tailgating party since they provide the shelter necessary to keep the fun going.

This made me wonder, can you grill under a canopy?

Grilling under a canopy is possible although some safety precautions must be taken. First use a grill with lower heat such as a smoker, propane, or electric grill. Next, place the canopy on the tallest setting to prevent the heat and smoke from damaging the canopy.

Even with these safety precautions, using a grill under a canopy still has some potential risks.

Risks Of Grilling Under A Canopy

It’s important to be aware of the risks of grilling under a canopy so you know what to look out for.

1. Canopy Can Get Too Hot

The first risk of grilling under a canopy is getting the canopy too hot.

Depending on the material of the canopy, the canopy can start to melt or even catch on fire.

So it’s important to be aware of the risks of having hot air from a grill hitting the canopy cover. Not to mention the smoke from the grill can also discolor the canopy and leave dark soot.

Generally, most canopy manufacturers will not recommend grilling under the canopy.

Most canopy covers are made of polyester, vinyl, or polyethylene material which are not fireproof materials. In fact, these materials will melt and can create harmful smoke if these plastics fall into the fire.

So it is critical that you keep the canopy as cool as possible by placing the canopy on the tallest setting.

The last main risk when grilling under a canopy is the smoke smell and residue that will be left behind.

Even if you are able to safely and successfully grill under a canopy, the grill will leave a smoke smell and residue on the canopy.

7 Tips For Safely Grilling Under A Canopy

Now that you are aware of the potential problems that might occur during grilling, it is time to cover some tips on how to make grilling under a tent canopy as safe as possible.

1. Position The Grill Away From Home

First, and most importantly, make sure to place the grill at least 10 feet away from the home or any other structure.

Grills produce a large amount of heat so you do not want to accidentally start an uncontrolled fire on a large structure. So place the grill and canopy at least 10 feet away from the home if possible.

2. Do Not Use Lighter Fluid

Avoid using lighter fluid or other fire accelerants which can create a large fire or flare-up.

A quick and large flame can reach the canopy cover and melt or set the canopy on fire.

So make sure to use a low and controlled fire when grilling under a canopy. This also means to try and avoid grilling fatty foods directly over the fire which may also create a large flare-up.

One of the best preventative tips for reducing the amount of unnecessary smoke that gets created when grilling is to simply clean the grill.

Removing any excess accumulation of fat, grease, ash, and dirt will help the grill run smoothly and create less smoke.

So before grilling under a covered area, make sure to clean the grill before firing it up.

When you grill under a canopy, the heat and smoke will fill up the canopy cover quickly.

In order to prevent an accumulation of smoke underneath the canopy, a vent or exhaust holes will help the smoke exit the canopy safely.

Some canopies come with exhaust vents, but if yours does not then a small fan can be placed to blow the smoke out the side.

Worst case the canopy cover may fill up with smoke which can be annoying or unpleasant to grill under if the food is smoking heavily.

Firmly secure the canopy tent to the ground with either sandbags, stakes, or rope to ensure that the canopy does not tip over or fly away.

The last thing you want when grilling under a canopy is to have it start to fly away which would leave your grill exposed to the weather.

6. Do Not Leave The Grill Unattended

The grill should never be left unattended when grilling under a covered area.

Grilling under a canopy has additional risks so make sure to always keep an eye on the grill just in case something starts to go wrong.

When grilling in general, a fire extinguisher should be within reach.

A benefit of grilling under a canopy is that you will be able to grill food under almost any weather conditions.

However, most canopy cover materials are not designed to be used for grilling. So grilling under a canopy comes with additional fire risks.

If you do decide to grill under a canopy, make sure to follow the tips listed in this article and be aware of the additional risks. With the right preventative steps, grilling under a canopy is possible.

So whether you’re tailgating in a parking lot or grilling in a park, having a canopy can create the necessary shelter from rain and other unpleasant weather to allow you to keep grilling.