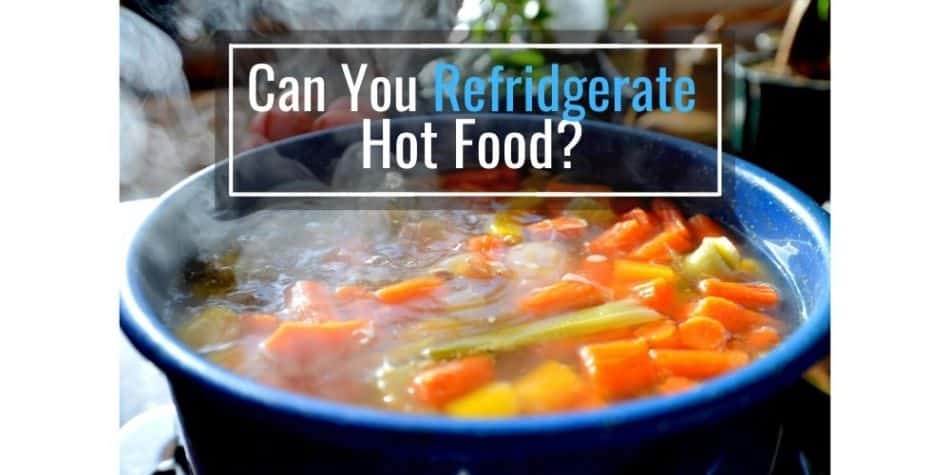 You’ve just cooked a big batch of food but you’re in a rush to get out of the house to do errands. Your food is still hot and won’t cool for several minutes or even an hour… So what do you do?

Can you refrigerate food that was just cooked and is still hot?

Freshly cooked or hot food can be placed directly into the refrigerator. It is a common myth that food needs to be cooled before being placed into the fridge. The benefit to having food cool before placing it in the fridge is that it will not raise your fridge’s temperature which might affect the other food in the fridge.

A simple solution is to portion hot food into small containers so that it can cool quickly.

In the old days, placing hot food into a refrigerator would raise the temperature causing other foods to spoil. However, modern refrigerators can maintain a cool, food safe temperature even with a hot dish placed directly into the fridge.

We will cover some common questions and tips on how to properly store hot food in the fridge below.

How Long Should You Let Food Cool Before Refrigerating?

You should refrigerate foods as soon as possible after they have cooked.

Do not let perishable food like meat, poultry, seafood, or eggs sit out for more than 2 hours. If you live in a hot climate where the temperature is over 90°F outside then you should refrigerate the food within 1 hour of cooking.

If you leave hot food out at room temperature for lengthy periods of time then bacteria can grow in the food. So it is best to refrigerate foods shortly after cooking even if the food is still hot.

Is It Bad To Put Hot Food In The Fridge?

That being said, it’s not bad to put hot food that you’ve placed into shallow containers in the refrigerator.

It will cool fairly quickly and reach a safe temperature before 40°F or 4°C.

So throw your leftover or hot food into smaller containers so that they can cool down quickly without greatly affecting the fridge’s temp.

What Happens To Hot Food That Gets Refrigerated?

Hot food refrigerated in small containers cools quickly so there isn’t much that would happen.

There might be some condensation at the top of the lid but that’s okay. Hot food does not spoil if it is immediately placed in the refrigerator even if condensation develops on the lid.

How Do You Store Food In The Refrigerator Safely?

Hot food should be portioned out into small airtight containers. Liquids should be no more than 2 inches deep in the containers so that they reach a safe temperature of below 40°F or 4°C as quickly as possible.

Do not put big vats of soup, jam, stew, or other extremely hot foods in your fridge as they will increase the temperature of your entire refrigerator.

Portioning out hot food into small batches with smaller containers is the way to go.

Make sure you space out your containers to allow for circulation of cool air. If you pile up many containers of hot food together then it will create the same effect as if it were one big container of hot food.

If you do not have shallow containers and you’ve got extremely hot soup that you need to store then there is on trick you can do.

What Is The “Danger Zone”?

This is when bacteria are most likely to grow very quickly which can cause foodborne illnesses. If you leave your food out for a while, it can get to that danger zone fairly quickly.

This is why you should try to get your food into the refrigerator as quickly as possible. It allows the temperature of your food to drop below 40°F after cooking and reduces the risk of bacteria development.

What Bacteria Grows On Food Left At Room Temperature?

Food that has been left at room temperature for too long can cause many different types of bacteria to grow.

Some of the most common are Staphylococcus aureus, Salmonella Enteritidis, Escherichia coli O157:H7, and Campylobacter according to the USDA.

All these bacteria can cause foodborne illnesses with symptoms of nausea, cramps, fever, aches, fatigue, and even worse vomiting and diarrhea.

Take all the necessary precautions to avoid getting your family and yourself sick by staying out of the Danger Zone temperatures of 40°F and 140°F, or 4.4°C and 60°C.

Not being able to place hot food into the fridge is a common food myth.

In fact, it’s actually safer to refrigerate your foods sooner rather than later. However, you should take the extra step of portioning out your hot food into smaller airtight containers to prevent heating up your fridge and spoiling everything else that is in it.

Next time you cook anything from soup to grilled chicken, feel free to store it in the refrigerator after you finish cooking it.