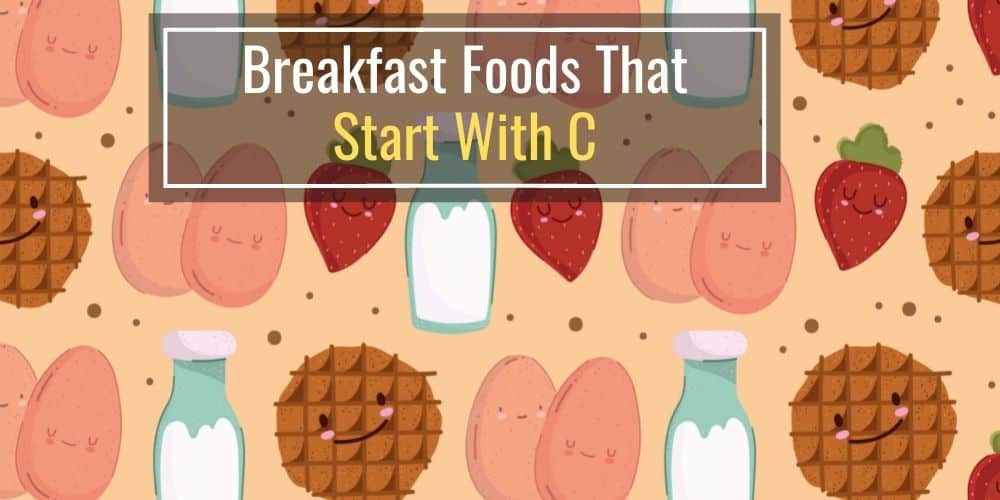 Are you wondering what breakfast foods start with the letter C?

Well, look no further as we have compiled a list of breakfast foods that begin with the letter C!

Cereal is one of those essential breakfast meals that also starts with the letter C.

The first cold breakfast cereal (granola) was invented in the U.S. mid-19th century. Cereals cover a variety of foods, including porridge, muesli, grits, and granola.

However, popular cereal brands such as Cheerios, Rice Crispies, and Lucky Charms are made primarily of whole grain oats or whole grain corn that is shaped and formed into the cereal that we’ve come to know and love.

Not to mention cereal is a great way to start the day off lightly with a bit of milk.

Originating from a 20th-century Harlem restaurant, Chicken and Waffles is a delicious meal that can be eaten for breakfast and starts with the letter C.

This well-rounded meal is associated with soul food and can be enjoyed with various side dishes such as red beans and rice, corn, potato salad, and numerous syrups and dressings.

Add some coffee on the side and you’re bound to start off the day full and ready!

Chilaquiles are another savory dish that is usually enjoyed for breakfast.

As a traditional Mexican meal, chilaquiles are made of tortilla chips, sauce a cheese, while a more traditional version features a tomato sauce, similar to the one used for enchiladas.

Chilaquiles can be served with shredded chicken or a sunny-side-up egg or two.

Chorizo is a type of pork sausage commonly found on breakfast tables and starts with the letter C.

Coming from the Iberian Peninsula, Chorizo differs from continent to continent.

In Europe, Chorizo can be eaten without cooking as they are fermented, smoked, and cured, while they may require cooking in other areas.

Chorizo gets its beautiful reddish color from dried and smoke peppers.

You will often eat Chorizo in a sandwich or as a main dish with eggs, rice, and beans.

The cinnamon roll is a popular breakfast food and starts with C.

It is believed that the cinnamon roll originated in Sweden and was popularized in the US by Swedish and German immigrants.

The cinnamon roll is one of the simplest dishes as it is made of dough and a mixture of sugar and cinnamon. Therefore, it is best to pair with savory or sour side dishes and sauces or contrast it with fresh fruits.

Not to mention you can always pair a warm cinnamon roll with coffee for a really pleasant start to the morning.

Cinnamon Toast Crunch is a cereal that is often eaten for breakfast.

Originally, it was introduced in 1984 and consisted of squares made of wheat and rice coated with cinnamon and sugar with added vitamins and minerals.

Like any other type of cereal, Cinnamon Toast Crunch is eaten with cold milk.

Cappuccino is one of the most popular coffee drinks associated with breakfast and it starts with the letter C.

While cappuccino is not considered a food, it is essential to any breakfast table.

Originating from Austria, Cappuccino was later developed in Italy and can be consumed with various other breakfast foods such as croissants, toast, and eggs.

Coffee is one of the most consumed drinks for breakfast across the globe.

An actual wake-up call, coffee contains caffeine, stimulating and providing energy for the day. It is believed that coffee originated in Ethiopia and was discovered in the 9th-century goat-herder.

Coffee is best paired with a healthy breakfast idea such as cereal bowls, boiled eggs, and toast.

Coffee cake is yet another classic and scrumptious breakfast dish that will ‘spice up’ your breakfast table.

It is a tender and moist cake coated with streusel topping or a cinnamon and sugar mixture.

Coffee Cake is very easy to make and is commonly served with coffee, tea, whipped cream, or ice cream.

Originated in Native American cuisine, Cornbread is a type of quick batter bread eaten for breakfast.

This perfectly plain and blank dish is ideal for mixing and combining with other meals and drinks.

Cornbread can be enjoyed with many foods, side dishes, and spreads, including butter, BBQ beef, chicken noodle soup, and many others.

Chocolate Gravy is a breakfast dish that starts with the letter C.

Commonly consumed in the cuisine in the Southern United States, it is a type of gravy made of flour, fat, sugar, and cocoa powder.

There are several varieties of chocolate gravy, and they usually differ in the amounts of the mentioned ingredients so that chocolate gravy can be thicker or more liquid-like. It is served with fresh biscuits.

Cream Cheese is yet another breakfast staple that will enrich your table.

Cream Cheese is a soft, fresh cheese made from milk and cream and is very popular in the Jewish Cuisine of New York City.

This unique dish is often used as a spread and combined with various types of bread and bread-like products such as bagels and crackers.

Creamed Eggs on Toast is a traditional African dish and the height of morning comfort foods.

This highly versatile and filling food is made of eggs and a white sauce drizzled over a toast.

It is believed that creamed eggs on toast originated during the Depression Era and can be consumed with various drinks and vegetables or fruits, like oranges, avocado, and strawberries.

Crepe is a very popular sort of pancake commonly enjoyed for breakfast.

It originated in Brittany, France, in the 13th century, and ever since, it has been a staple for delicious breakfast.

This versatile on-the-go breakfast is often served with fresh fruits, an assortment of jams, and whipped cream.

Croissant is probably one of the most popular choices for continental breakfast that starts with the letter C.

It carries the name croissant due to its historical crescent shape, and it has been enjoyed since the Renaissance.

Croissants are typically filled with chocolate or jam, while the plain variety is also popular and eaten with various foods, including ham, eggs, and avocados.

Cantaloupe is a trendy fruit served for breakfast and starts with the letter C.

Even though it is not technically a dish, cantaloupe is often found on large breakfast plates.

Cantaloupes are an excellent choice for breakfast because they are low-calorie and contain vitamins A and C.

You can eat them on their own, in a salad, or enjoy them as a side dish with toast and various pastries.

Cretons is another versatile dish that is commonly served for breakfast.

It is a type of pork forcemeat spread emulsified with fat and it originated in Canada. Cretons have numerous variations and are eaten with toasts, crostini bread, or crackers.

Crumpet is a type of small bread that starts with the letter C.

It is said to have originated in Wales, and it is made from unsweetened batter, flour, and yeast.

Crumpet can be easily incorporated into a healthy and balanced diet and will definitely keep you full for longer. This delicious pancake-like food is consumed with sweet or savory toppings, eggs, and butter.

Also known as Golden Perch, callops are ideal for serving as a fillet with fries, mashed potatoes, and vegetables. It is also common to see baked callops with herbs and olive oil or walnut stuffing.

Congee is a classic Chinese breakfast dish that starts with the letter C.

This type of rice porridge is also eaten in other countries such as Burma, Indonesia, and Japan.

Congee is regarded as one of the most nourishing foods globally and can be eaten plain with various spices, scallions, fish sauce, and cilantro. 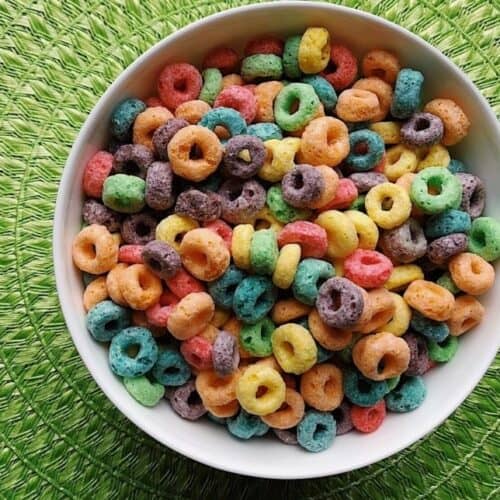 Breakfast Foods That Start With C