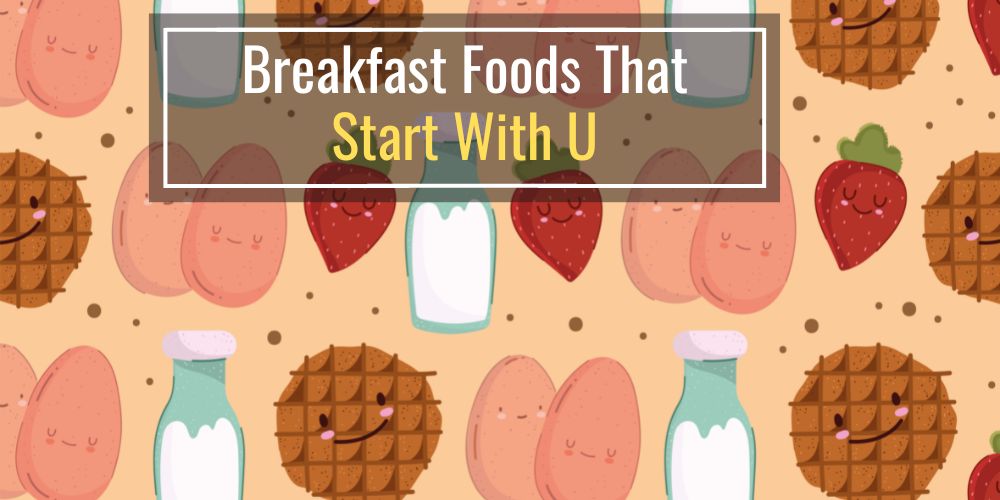 If you’re trying to look for breakfast foods that start with the letter U then look no further!

We’ve compiled a list of different breakfast foods from around the globe that begin with the letter U.

Ube halaya is a classic Filipino dessert that is often incorporated into numerous breakfast dishes.

This uniquely colored and simple dish is made of peeled and boiled purple yam combined with condensed milk and butter.

Ube serves as the main base for various ube-flavored pastries and ice cream.

Regarding breakfast ideas, you can use ube with eggs, as a base for pancakes, or rice.

Ugali, also known as sima, is a type of porridge made of corn flour that is eaten for breakfast and also starts with the letter U.

Originated in Africa, ugali has more than a dozen other names and can be made with different types of flour besides maize, such as millet flour.

It entered African cuisine after the Americans introduced corn to Africans in 16th and 17thcentury. Like other types of porridge, Ugali is easily made; you cook it in boiling water of milk.

This breakfast dish is served with various meats, grilled vegetables, and sour milk.

This fruit, a natural hybrid of tangerine/orange and grapefruit, is packed with vitamins, plant compounds, and fibers and offers numerous health benefits.

Even though ugli fruit is not a dish, it is used to make various breakfast dishes such as salads or eaten on its own.

Ukrainian rolls, also known as pampushky, are a breakfast dish that starts with the letter U.

These bread rolls are made with garlic, a staple of Ukrainian cuisine. They are usually served fresh from the oven or reheated with traditional Ukrainian dishes such as borscht.

The rolls have numerous variants, but the idea is the same for every pampushky- fluffy buns topped with a blend of oil, herbs, and freshly minced garlic.

Umble pie, also known as humble pie, is another dish commonly served for breakfast that starts with the letter U.

The word umble is an archaic term that refers to deer offal or entrails, which gives you a hint of what’s its main ingredient.

This savory pastry dish is stuffed with a minced variety of meats or organ meats, usually deer, but it can be made with other meats.

Upma is an Indian hot-favorite breakfast dish that starts with the letter U!

Originated in South India, Upma is a type of porridge-like food made of dry-roasted semolina or rice flour with oil and herbs.

It provides a set of health benefits as rava, used to make upma, contains proteins, vitamin B, and iron. In addition, you can add fresh or grilled vegetables to make upma more healthy.

Upma dosa is another perfect breakfast idea that starts with the letter U.

This dish is made of golden-brown dosas (thin batter-based dish) stuffed with tasty rava upma.

It is very easy to make, and upma dosa is basically two dishes combined in one. Coming from India, it is often served with sambhar and coconut chutney.

Utah scones, known as fried scones, are a fluffy and light cake-like dish served for breakfast.

Although they carry the name Utah, they actually originated in the area that is today known as Albuquerque, New Mexico.

Utah scones are very similar to sopaipillas; in Spanish, sopa means bread soaked in oil. The scones are served with honey or butter and topped with powdered sugar.

Uthappam is a very trendy South- Indian dish that starts with the letter U!

It is a type of dosa made from a batter consisting mainly of lentils and rice.

Unlike typical dosa, which is very crispy and similar to crepes, Uthappam is thicker and topped with tomatoes, coriander, chilies, or onions.

This round and filling dish is usually served alongside idli, savory rice cake, with sambar or chutney.

Udon is a Japanese noodle dish that is commonly found on breakfast tables.

This thick noodle made of wheat flour can be made in several ways and combined with numerous ingredients.

Udon, considered comfort food in Japan, is usually served in a hot soup with a mild broth consisting of dashi, soy sauce, and mirin.

Like many Asian dishes, Udon is topped with chopped scallions or numerous other traditional Japanese toppings or products.

Umbrella pasta is a very light and easy breakfast dish that starts with the letter U.

Traditional to Umbria, the region in Italy, this pasta variety is very similar to pici Toscani which is shaped in wider and thicker stripes.

Traditionally, umbricelli pasta is served with tomato sauce and grated pecorino cheese, although some like to use parmesan.

Unadon is a popular Japanese breakfast dish that starts with the letter U.

This filling and packed dish has two ingredients; steamed white rice served in a large bowl or donburi and eel fillets glazed with a sweetened soy-based sauce.

It is usually topped with pulverized dried berries of Japanese pepper.

Uszka or vushka are small dumplings often found on breakfast tables and that start with the letter U!

These tiny Polish dumplings are usually filled with a blend of wild forest mushrooms and meat, although it can be just one of those fillings.

They are usually eaten alongside the traditional Ukrainian dish borscht, a sour soup, but can be enjoyed with melted butter and some chives sprinkled on top.